Sexual Success And The Schizoid Factor 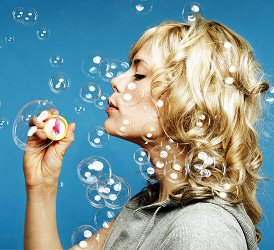 Ever wondered why uncouth, scruffy rock musicians are pursued by legions of doting, lovelorn female fans? Or why women threw themselves at Pablo Picasso? Well, a new study suggests that creativity may confer an evolutionary advantage in finding a mate; indicating that creative types have increased sexual appeal. But paradoxically, people who have certain traits predictive of schizophrenia - a condition not normally associated with evolutionary fitness - also have a higher propensity toward artistic ability. This creative ability, say some evolutionary experts, is far from being a disadvantage, as creativity is highly attractive when it comes to mate choice.

Like Richard Dawkins, Daniel Dennett and Stephen Pinker, evolutionary psychologist Geoffrey Miller considers sexual selection to be right up there in importance with natural selection. Advocates of sexual selection argue that competition between members of the same sex drives the evolution of particular traits that mates of the opposite sex find attractive. Miller, author of The Mating Mind: How Sexual Choice Shaped the Evolution of Human Nature, claims that traits like morality, art, language and creativity, influence the way in which the human mind evolves. It may sound like a stretch, but recent studies show that reliable predictions of mate choice can be made using these kinds of traits as a guide. Before looking more closely at these studies, however, it's worth first considering whether creativity is actually quantifiable.

Neuroscientist V. S. Ramachandran's musings on savants, who display exceptional skills in a very specific field, is illuminating in this respect, as he "unashamedly speculates" that a savant's talents may stem from an enlarged section of the brain called the angular gyrus. "You can imagine an explosion of talent resulting from this simple but 'anomalous' increase in brain volume," says Ramachandran, adding: "The same argument might hold for drawing, music, language, indeed any human trait." Ramachandran explains that this theory is at least in part testable, and points to examples where damage to the right parietal cortex "can profoundly disrupt artistic skills, just as damage to the left disrupts calculation." Ramachandran also considers possible the idea that these esoteric human traits can be attractive to mates in the way that a male peacock's plume is attractive, as exceptional ability in music, poetry or drawing may be an "externally visible signature of a giant brain." Citing Dawkins, Ramachandran argues "that this 'truth in advertising' may play an important role in mate selection."

Despite what seems to be logically valid reasoning, Ramachandran stresses that the talents and specializations associated with the savant are not enough. They will not become a Picasso or Einstein, because they are missing one vital, ineffable ingredient: creativity. "There are those who assert that creativity is simply the ability to randomly link seemingly unrelated ideas, but surely that is not enough," writes Ramachandran. We may have a fantastic grasp of language, and think that we can knock out a half decent metaphor on call, but it is actually harder than most people think. Yet when we come across something truly creative, it speaks volumes to us, "In fact," says Ramachandran, "it's crystal clear once it is explained and has that 'why didn't I think of that?' quality that characterizes the most beautiful and creative insights."

But if creative juices are responsible for an evolutionary advantage, there must surely be some aspect of this seemingly ineffable trait that can be identified as heritable. This brings us back to Geoffrey Miller, who argues that traits such as creativity are a result of personality disorders such as schizophrenia. Yes, that's right; Miller is arguing that what is usually considered to be an evolutionary disadvantage is actually just the opposite.

After conducting their own study, researchers Daniel Nettle and Helen Clegg believe that they have confirmed Miller's assertions, and in doing so have solved a long standing mystery. "There is an evolutionary puzzle surrounding the persistence of schizophrenia, since it is substantially heritable and associated with sharply reduced fitness," the authors begin in their paper entitled "Schizotypy, creativity and mating success in humans", published in The Proceedings of the Royal Society. The authors cite previous studies that claim schizophrenia is associated with poor health and reduced chances of reproduction, but add: "The fact that this does not appear to happen has lead many commentators to speculate that there must be other, beneficial effects of the traits."

Nettle and Clegg state that schizophrenia-proneness manifests in a number of different personality traits collectively known as schizotypy, with schizotypy coming in 4 distinct dimensions. Schizophrenia patients score more highly on all 4 dimensions, say the authors, with schizotypy scores being predictive of schizophrenia in longitudinal studies. The authors also point to studies of people within the creative arts who display increased levels of certain schizotypy traits, as well as a bulging case file of people with psychiatric illness in artistically successful families. Nettle and Clegg believe that there is enough evidence to support the idea that "artistic creativity is a candidate for the evolutionarily beneficial effect of schizotypy."

Studying a cross section of the community which was augmented by a targeted sampling of artists and poets, Nettle and Clegg set about examining the subjects' mating conquests, measured by such things as the length, type and number of encounters each subject had. The study included a mix of the 4 schizotypy dimensions:

It was found that not all schizotypy dimensions are advantageous in regard to creative attractiveness. Cognitive disorganization, for example, was not included in the path analysis, because they found it had no significant bearing on creativity or mating success, and introvertive anhedonia was found to have an inhibiting effect on both creativity and the number of mates.

Of the two remaining dimensions, unusual experiences was found to have a positive impact on creative activity, which in turn led to a positive effect on the number of partners, while impulsive non-conformity had a significant positive effect on the number of partners. Nettle and Clegg believe that these results are enough to support Miller's hypothesis that artistic creativity functions as a mating display. "The results are consistent with the view that schizotypal traits are maintained in the human population at significant levels because the negative effects in terms of psychosis and other psychopathology are offset by enhanced mating success."

These findings raise interesting questions. Where do we acquire our receptiveness to creativity and our appreciation for creative works? Is it innate, or are the people exhibiting creative schizotypy traits doing the hard work for us, by presenting reality to us in novel, imaginative and inventive ways? Whether or not we have a natural capacity for creative appreciation, our like or dislike of specific creative works may be primed by prior creative achievements.

One recent study illustrates this point. It examined what is known as "white space" in the advertising industry, and showed that what might appear to be an innate pull toward specific aesthetics in humans has actually been acquired from prior periods in art. In this particular case, the researchers found that our appreciation for white space - and the refined, chic qualities it conveys - harked back to the 1950s minimalist period. They also found that subjects unaware of the origins of white space still appreciated its intended qualities nonetheless. Given these findings, can we conclude that while humans have a capacity for creativity or creative appreciation, that this creativity is influenced by social norms predicated on past creative periods? A creative feedback loop, if you like, that constantly advertises one aspect of evolutionary fitness: creativity.