You are here: Home › Evolution › News › New fossil interpretation challenges notion that birds are descended from dinosaurs
By Will Parker on July 10, 2014 in Evolution, News 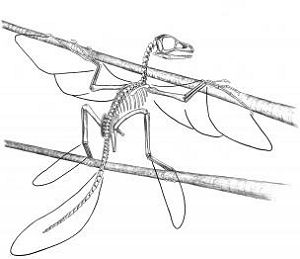 Re-examination of a sparrow-sized fossil from China has led researchers to challengethe commonly held belief that birds evolved from ground-dwelling dinosaurs that gained the ability to fly. Researchers Stephen Czerkas of the Dinosaur Museum in Utah, and Alan Feduccia of the University of North Carolina, say that the birdlike fossil is actually not a dinosaur, as previously thought, but rather the remains of a tiny tree-climbing animal that could glide (pictured). The pair present their arguments in the latest issue of the Journal of Ornithology.

The fossil of the Scansoriopteryx (which means “climbing wing”) was found in Inner Mongolia, and is part of an ongoing cooperative study with the Chinese Academy of Geological Sciences. It was previously classified as a coelurosaurian theropod dinosaur, from which many scientists believe flying dinosaurs and birds later evolved.

Czerkas and Feduccia used 3D microscopy, high resolution photography, and low angle lighting to reveal structures in the fossil not clearly visible. Many ambiguous aspects of the fossil’s pelvis, forelimbs, hind limbs, and tail were confirmed, while it was discovered that the specimen would have had elongated tendons along its tail vertebrae – similar toVelociraptor. 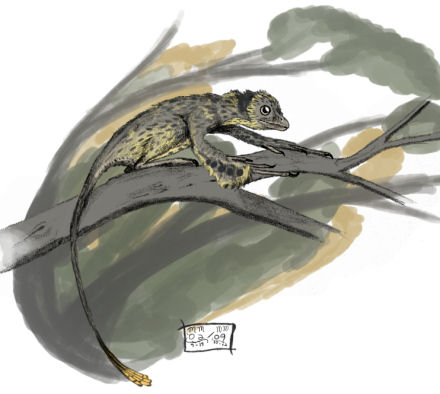 Importantly, the researchers say, Scansoriopteryx unequivocally lacks the fundamental structural skeletal features required to classify it as a dinosaur. The Scansoriopteryx, they contend, should rather be seen as an early bird whose ancestors are to be found among tree-climbing archosaurs that lived in a time well before dinosaurs.

Through their investigations, the researchers found a combination of ancestral non-dinosaurian traits along with highly derived features. The specimen has numerous unambiguous birdlike features such as elongated forelimbs, wing and hind limb feathers, wing membranes in front of its elbow, half-moon shaped wrist-like bones, bird-like perching feet, a tail with short anterior vertebrae, and claws that make tree climbing possible. The researchers specifically note the primitive elongated feathers on the forelimbs and hind limbs. This suggests that Scansoriopteryx is an ancestral form of early bird that had mastered the basic aerodynamic maneuvers of parachuting or gliding from trees.

The new findings would appear to validate predictions first made in the early 1900’s that the ancestors of birds were small, tree-dwelling archosaurs with feathers that enabled them to glide. This “trees down” view is in contrast with the “ground up” view embraced by many paleontologists that birds derived from terrestrial dinosaurs.

“The identification of Scansoriopteryx as a non-dinosaurian bird enables a reevaluation in the understanding of the relationship between dinosaurs and birds. Scientists finally have the key to unlock the doors that separate dinosaurs from birds,” said Czerkas. “Instead of regarding birds as deriving from dinosaurs, Scansoriopteryx reinstates the validity of regarding them as a separate class uniquely avian and non-dinosaurian.”