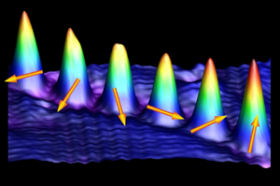 The use of atomic spin to create nanoscale magnetic storage devices – a research field known as spintronics – is a hot topic in physics and computing, but until now no one had actually seen this quantum mechanical property of electrons in action. That has now changed thanks to the work of physicists at Ohio University (OU) and the University of Hamburg whose work is reported in Nature Nanotechnology.

The researchers used a custom-built microscope with an iron-coated tip to manipulate cobalt atoms on a plate of manganese. Through scanning tunneling microscopy, the team repositioned individual cobalt atoms on a surface that changed the direction of the electrons’ spin. The images captured by the team show that the atoms appear as a single protrusion if the spin direction is upward and as double protrusions with equal heights when the spin direction is downward.

The study suggests that scientists can observe and manipulate spin, a finding that supports the development of nanoscale magnetic storage devices, quantum computers and spintronic devices. “Different directions in spin can mean different states for data storage,” said OU’s Saw-Wai Hla, one of the primary investigators on the study. “The memory devices of current computers involve tens of thousands of atoms. In the future, we may be able to use one atom and change the power of the computer by the thousands.”

The experiments were conducted in an ultra-high vacuum at the low temperature of 10 Kelvin, so work still needs to be done before the phenomenon can be replicated at room temperature. But the new study suggests a path forward, said study lead author Andre Kubetzka of the University of Hamburg. To image spin direction, the team used a manganese surface with a spin that, in turn, allowed the scientists to manipulate the spin of the cobalt atoms under study. “The combination of atom manipulation and spin sensitivity gives a new perspective of constructing atomic-scale structures and investigating their magnetic properties,” Kubetzka explained.

Getting A Handle On Spintronics