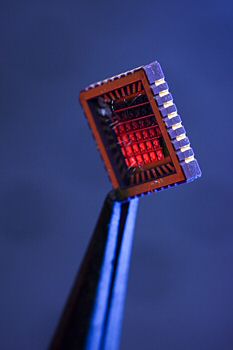 An experiment, conducted by electrical engineers from the University of Delaware (UD) and Cambridge NanoTech, has shown for the first time that the spin properties of electrons in silicon can be measured and controlled.

The discovery could dramatically advance the emerging field of spintronics, which focuses on harnessing the “spin” property of electrons – instead of their charge – to create much faster and more powerful electronics and computers.

Currently, manipulating electron charge is the sole characteristic the electronics industry utilizes in computers and other digital devices. But in an effort to create faster and more powerful devices, researchers have been exploring the possibility of instead using electron spin to carry, process and store information. A major goal in this spintronics research is to reach the precise level of control over electron spin that modern electronics has executed over electron charge.

“An electron has intrinsic angular momentum called spin,” UD’s Ian Appelbaum noted. “The first step to making spintronic devices and circuits is to inject more spins of one direction than in the opposite direction into a semiconductor.”

To provide conclusive evidence of spin transport in silicon, Appelbaum and co-researcher Biqin Huang fabricated small, silicon semiconductor devices (pictured) using a custom-built, ultra-high vacuum chamber for silicon-wafer bonding. After spin injection, electrons in the silicon were then subjected to a magnetic field, which caused their spin direction to “precess” or gyrate (much like gravity’s effect on a rotating gyroscope), producing tell-tale oscillations in their measurement. “The processes of precession and dephasing, or decay, are the most unambiguous hallmarks for spin transport. Our work is the first time anyone has shown this effect in silicon,” Appelbaum explained.

“It’s an important problem to solve because silicon is the most important semiconductor for electronics,” Appelbaum noted. “However, methods that worked for spin detection in other semiconductors failed in silicon.”

Commenting in Nature, Igor Zutic of the Department of Physics at the State University of New York at Buffalo, said that Appelbaum’s work could be a decisive development in spintronics; “the first demonstration of the transport and coherent manipulation of electron spin in silicon.”

“We hope we’re with spintronics where Bell Labs was with semiconductor electronics in 1948,” Appelbaum concluded. That year, Bell announced the invention of the transistor, which laid the foundation for modern electronics.

Check out an animation from the University of Delaware.