You are here: Home › News › Physicists Create Quantum-Entangled Images
By Will Parker on June 13, 2008 in News 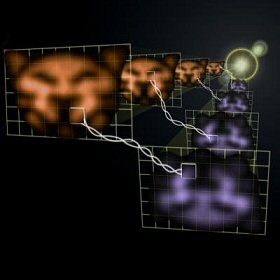 Using twin light beams and a technique known as four-wave mixing, researchers at the Joint Quantum Institute (JQI) and the University of Maryland have produced “quantum images,” pairs of information-rich visual patterns whose features are entangled. Entanglement, or what Einstein referred to as “spooky action at a distance,” means that changes in one image are instantaneously replicated in the other image, regardless of the distance separating them.

Reporting on their work in Science Express, the researchers say the new technique may someday be useful for storing patterns of data in quantum computers and transmitting large amounts of highly secure encrypted information.

The quantum images produced by the researchers are born in pairs. Transmitted by two light beams originating from the same point, the two images are like twins separated at birth. Look at one quantum image, and it displays random and unpredictable changes over time. Look at the other image, and it exhibits very similar random fluctuations at the same time. This entanglement means that their properties are linked in such a way that they exist as a unit rather than individually.

To create the quantum images, the researchers used a method known as four-wave mixing, where incoming light waves enter a gas and interact to produce outgoing light waves. In this setup, a fainter “probe” beam passes through a stencil-like mask with a visual pattern. Imprinted with an image, the probe beam joins an intense “pump” beam inside a cell of rubidium gas. The atoms of the gas interact with the light, absorbing energy and re-emitting an amplified version of the original image. In addition, a complementary second image is created by the light emitted by the atoms. To satisfy nature’s requirement for the set of outgoing light beams to have the same energy and momentum as the set of incoming light beams, the second image comes out as an inverted, upside-down copy of the first image, rotated by 180 degrees with respect to the pump beam and at a slightly different color (the graphic above shows a montage of actual quantum images).

One breakthrough in the new work is that each image is made of up to 100 distinct regions, akin to the pixels forming a digital image, each with its own independent optical and noise properties. A pixel on one image forms a partnership with a pixel on the other image.

Previous efforts at making quantum images have been limited to building them up with “photon counting” – collecting one photon at a time over a long period of time, or having very specialized images such as something that could only be constructed from a dot and a ring. In contrast, the new method produces an entire image at one time and can make a wide variety of images in any shape. “Making entangled quantum images is really striking, but what is most impressive to us is that the technique for making them is so much easier than what was possible before,” noted JQI’s Paul Lett.

The next goal for the researchers is to produce quantum images with “slowed-down” light; such slowed images could be used in information storage and processing as well as communications applications.

The Feynman Processor : Quantum Entanglement and the Computing Revolution (Helix