You are here: Home › News › Fifteen-Thousand-Foot Fossil Find Flummoxes Fossickers
By Will Parker on June 12, 2008 in News 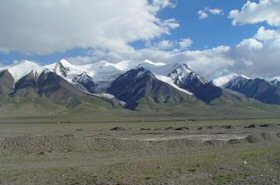 At 15,000 feet above sea level on the desolate Himalayan-Tibetan Plateau, an international research team has found thick layers of lake sediment filled with plant, fish and animal fossils typical of far lower elevations and warmer, wetter climates. The fossils are relatively young (around 2 million years) leading the researchers to ponder what could have caused such a sudden and massive change in the environment.

Reporting their findings in the journal Earth and Planetary Science Letters, the team, led by Florida State University geologist Yang Wang, note that while climate change is the obvious suspect, there is another, more controversial, possibility. Major tectonic changes on the Tibetan Plateau may have caused it to attain its towering present-day elevations – rendering it inhospitable to the plants and animals that once thrived there – as recently as 2-3 million years ago, not tens-of-millions of years earlier, as geologists have generally believed. This theory directly challenges the validity of methods commonly used by scientists to reconstruct the past elevations of the region.

“Establishing an accurate history of tectonic and associated elevation changes in the region is important because uplift of the Tibetan Plateau has been suggested as a major driving mechanism of global climate change over the past 50-60 million years,” explained Yang. “The uplift chronology of the Tibetan Plateau and its climatic and biotic consequences have been a matter of much debate and speculation because most of Tibet’s spectacular mountains, gorges and glaciers remain barely touched by man and geologically unexplored. It is very exciting that our work to-date has yielded surprising results that are inconsistent with the popular view of Tibetan uplift.”

Yang hopes to understand what caused the disappearance of the lakes by doing more research in the region this summer. “The next phase of our work will focus on examining the spatial and temporal patterns of long-term vegetative and environmental changes in and around the region,” she said. “Such records are crucial for clarifying the linkages among climatic, biotic and tectonic changes.”

Related:
Mountains Formed In The Blink Of An Eye
Mass Extinctions In Peru Due To Climate Change
Under Pressure: Earth Science (Part II)