You are here: Home › News › Robustness of quantum entanglement in photosynthesis surprises researchers
By Will Parker on May 11, 2010 in News 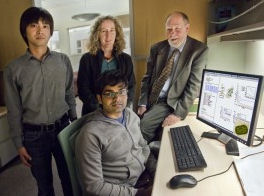 The development of clean solar power may hinge on scientists being able to unravel the mysteries of photosynthesis, the process by which green plants convert sunlight into electrochemical energy. To this end, US researchers have recorded the first observation and characterization of quantum entanglement in photosynthesis.

Previous experiments led by Berkeley Lab’s Graham Fleming (right in pic) pointed to quantum mechanical effects as key to the ability of green plants, through photosynthesis, to almost instantaneously transfer solar energy from molecules in light harvesting complexes to molecules in electrochemical reaction centers. Now, Fleming and a new collaborative team have identified entanglement as a natural feature of these quantum effects. Their work is reported in Nature Physics .

“This is the first study to show that entanglement, perhaps the most distinctive property of quantum mechanical systems, is present across an entire light harvesting complex,” says co-researcher Mohan Sarovar (seated in pic). “While there have been prior investigations of entanglement in ‘toy systems’ that were motivated by biology, this is the first instance in which entanglement has been examined and quantified in a real biological system.”

The results of this study hold implications not only for the development of artificial photosynthesis systems as a renewable non-polluting source of electrical energy, but also for the future development of quantum-based technologies in areas such as computing. “The lessons we’re learning about the quantum aspects of light harvesting in natural systems can be applied to the design of artificial photosynthetic systems that are even better,” Sarovar says. “The organic structures in light harvesting complexes and their synthetic mimics could also serve as useful components of quantum computers or other quantum-enhanced devices, such as wires for the transfer of information.”

What may prove to be this study’s most significant revelation is that contrary to scientific dogma, entanglement is not a fragile and exotic property. The Berkeley researchers have demonstrated that entanglement can exist and persist in the chaotic chemical complexity of a biological system.

“We present strong evidence for quantum entanglement in noisy non-equilibrium systems at high temperatures by determining the timescales and temperatures for which entanglement is observable in a protein structure that is central to photosynthesis in certain bacteria,” Sarovar said.

Plants and bacteria are able to transfer the energy harvested from sunlight through a network of light harvesting pigment-protein complexes and into reaction centers with nearly 100-percent efficiency. Speed is the key – the transfer of the solar energy takes place so fast that little energy is wasted as heat. In 2007, Fleming and his research group reported the first direct evidence that this essentially instantaneous energy transfer was made possible by a remarkably long-lived, wavelike electronic quantum coherence.

Using electronic spectroscopy measurements made on a femtosecond time-scale, Fleming and his group discovered the existence of “quantum beating” signals, coherent electronic oscillations in both donor and acceptor molecules. These oscillations are generated by the excitation energy from captured solar photons, like the waves formed when stones are tossed into a pond. The wavelike quality of the oscillations enables them to simultaneously sample all the potential energy transfer pathways in the photosynthetic system and choose the most efficient. Subsequent studies identified a closely packed pigment-protein complex in the light harvesting portion of the photosynthetic system as the source of coherent oscillations.

The new study shows that quantum entanglement emerges as the quantum coherence in photosynthesis systems evolves. The focus of their study was the Fenna-Matthews-Olson (FMO) photosynthetic light-harvesting protein, a molecular complex found in green sulfur bacteria that is considered a model system for studying photosynthetic energy transfer because it consists of only seven pigment molecules whose chemistry has been well characterized.

“We found numerical evidence for the existence of entanglement in the FMO complex that persisted over picosecond timescales, essentially until the excitation energy was trapped by the reaction center,” Sarovar explained. “This is remarkable in a biological or disordered system at physiological temperatures, and illustrates that non-equilibrium multipartite entanglement can exist for relatively long times, even in highly decoherent environments.”

The research team also found that entanglement persisted across distances of about 30 angstroms (one angstrom is the diameter of a hydrogen atom), but this length-scale was viewed as a product of the relatively small size of the FMO complex, rather than a limitation of the effect itself.

The research team was surprised to see that significant entanglement persisted between molecules in the light harvesting complex that were not strongly coupled (connected) through their electronic and vibrational states. They were also surprised to see how little impact temperature had on the degree of entanglement. “In the field of quantum information, temperature is usually considered very deleterious to quantum properties such as entanglement,” Sarovar noted. “But in systems such as light harvesting complexes, we see that entanglement can be relatively immune to the effects of increased temperature.”