You are here: Home › News › Real-World Quantum Effects Demonstrated
By Will Parker on February 11, 2005 in News 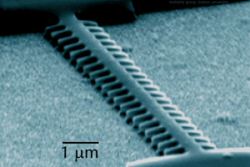 The realm of quantum mechanics met the world of classical physics when an antenna-like sliver of silicon one-tenth the width of a human hair oscillated in a Boston University lab. With two sets of protrusions, much like the teeth from a two-sided comb, the antenna not only exhibits the first quantum nanomechanical motion but is also the world’s fastest moving nanostructure. Comprised of 50 billion atoms, the antenna built is so far the largest structure to display quantum mechanical movements. The device is also the fastest of its kind, oscillating at 1.49 gigahertz, or 1.49 billion times a second. The quantum effect is evident when the nanomechanical oscillator starts to jump between two discrete positions without occupying the physical space in between.

Because the nanomechanical oscillator is “large”, the research team was able to attach electrical wiring to its surface in order to monitor tiny discrete quantum motion, behavior that exists in the realm of atoms and molecules. At a certain frequency, the paddles begin to vibrate in concert, causing the central beam to move at that same high frequency, but at an increased and easily measured amplitude. Where each paddle moves only about a femtometer, roughly the diameter of an atom’s nucleus, the antenna moves over a distance of one-tenth of a picometer, a tiny distance that still translates to a 100-fold increase in amplitude.

When fabricating and testing the nanomechanical device, the researchers placed the entire apparatus, including the cryostat and monitoring devices, in a copper-walled, copper-floored room. This set-up shielded the experiment from unwanted vibration noise and electromagnetic radiation that could generate from outside electrical devices, such as cell phone signals, or even the movement of subway trains outside the building. Even with these precautions, performing such novel experiments is tricky. “When it’s a new phenomenon, it’s best not to be guided by expectations based on conventional wisdom,” says Gaidarzhy. “The philosophy here is to let the data speak for itself.” The group carries out the experiments under extremely cold conditions, at a temperature of 110 millikelvin, which is only a tenth of a degree above the absolute zero. When cooled to such a low temperature, the nanomechanical oscillator starts to jump between two discrete positions without occupying the physical space in between, a telltale sign of quantum behavior.