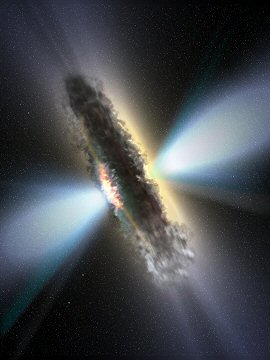 A mechanism for how information might escape from a black hole has been proposed by a team of physicists at Penn State who say that if quantum gravity is considered, then space-time becomes much larger and there is room for information to reappear in the distant future on the other side of what was first thought to be the “end” of space-time. The team’s findings, published inPhysical Review Letters, pave the way toward ending a decades-long debate sparked by uber-physicist Steven Hawking.

In the 1970s, Hawking asserted that information, such as the identity of matter that is gobbled up by black holes, is permanently lost. At the time, Hawking’s assertion threatened to turn quantum mechanics on its head, since a fundamental tenet of the theory is that information cannot be lost.

Physicists began to doubt the assertion in the 1990s and even Hawking himself renounced the idea in 2004. Yet no one, until now, has been able to provide a plausible mechanism for how information might escape from a black hole. Now, a team of physicists led by Abhay Ashtekar, director of the Penn State Institute for Gravitation and the Cosmos, believe they have discovered such a mechanism. Broadly, their findings expand space-time beyond its assumed size, thus providing “room” for information to reappear.

Ashtekar uses an analogy from Alice in Wonderland to explain the issue. “When the Cheshire cat disappears, his grin remains,” he said. “We used to think it was the same way with black holes. Hawking’s analysis suggested that at the end of a black hole’s life, even after it has completely evaporated away, a singularity – or a final edge to space-time – is left behind, and this singularity serves as a sink for unrecoverable information.”

But Ashtekar and his collaborators contend that singularities do not exist in the real world. “Information only appears to be lost because we have been looking at a restricted part of the true quantum mechanical space-time,” said co-researcher Madhavan Varadarajan. “Once you consider quantum gravity, then space-time becomes much larger and there is room for information to reappear in the distant future on the other side of what was first thought to be the end of space-time.”