You are here: Home › News › Black Hole The Ultimate Sub-Woofer
By Will Parker on October 6, 2006 in News 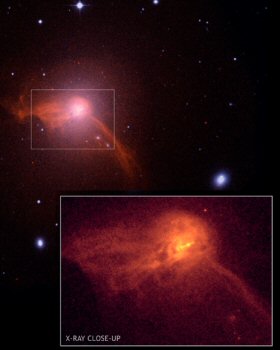 NASA’s Chandra X-ray Observatory has detected a cacophony of ultra-deep sound resonating through galaxy M87 thanks to a black hole that emits sounds around 56 octaves below middle C. M87, a giant elliptical galaxy, is centrally located in the Virgo cluster of galaxies and is known to harbor one of the universe’s most massive black holes.

The loops and rings in the hot, X-ray emitting gas that permeates M87 indicate periodic eruptions that occur near the black hole, generating changes in pressure in the gas that manifest themselves as sound. “We can tell that many deep and different sounds have been rumbling through this cluster for most of the lifetime of the Universe,” said astrophysicist William Forman.

The rumbling outbursts from the black hole, which happen every few million years, prevent the huge reservoir of gas in the cluster from cooling and forming new stars. Without this cacophony and resultant heating, M87 could look quite different. “If this black hole wasn’t making all of this noise, M87 could have been a completely different type of galaxy,” said team member Paul Nulsen, “possibly a huge spiral galaxy about 30 times brighter than the Milky Way.”

The astronomers say that the outbursts occur when material falls toward the black hole. While most of the matter is swallowed, some of it was violently ejected in jets. These jets are launched from regions close to the black hole and push into the cluster’s gas, generating cavities and sound which then propagate outwards.

The new observations also give the strongest evidence to date of a shock wave produced by the black hole, a clear sign of a powerful explosion. This shock wave appears as a nearly circular ring of high-energy X-rays that is 85,000 light years in diameter and centered on the black hole.

Other remarkable features are seen in M87 for the first time including narrow filaments of X-ray emission – some over 100,000 light years long – that may be due hot gas trapped by magnetic fields. “We can explain some of what we see, like the shock wave, with textbook physics,” said team member Christine Jones. “However, other details, like the filaments, leave us scratching our heads.”

Musically, the sound in M87 appears to be discordant and complex. A series of unevenly spaced loops in the hot gas suggest small outbursts from the black hole about every 6 million years. These loops imply the presence of sound waves, not visible in the Chandra image, which are about 56 octaves below middle C. The presence of the large cavity and the sonic boom gives evidence for even deeper notes – 58 or 59 octaves below middle C – powered by large outbursts.

View some animations of the black hole in action.