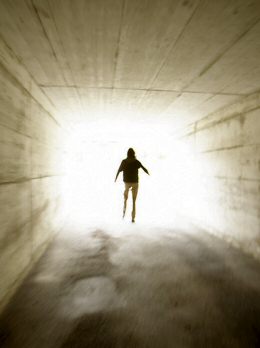 Last week, we introduced a cyclic model of the universe proposed by physicist Peter Lynds, who says that his model not only solves Kant's infinite versus finite universe paradox, but also resolves the mystery of the origin of the universe itself. Lynds' model predicts that the universe will contract toward a big crunch, but instead of a singularity ever being reached, events will reverse and the universe will again expand from a subsequent big bang. Unlike previous cyclic models, Lynds' does not breach any physical laws, as his model has entropy continuing to increase as a result of events being reversed.

If he's correct, then we live in a universe where there is no past or present, and one that is deterministic, even if it is impossible for us to recognize it as such. But there are a number of pressing questions in regard to Lynds' model. How does it fit in with current research that claims that the universe will expand forever? Does Lynds' model imply that the universe somehow "knows" to play events over and over? And will we all have to relive our lives backward?

But first, let's examine how Lynds came to the conclusion that events must reverse rather than end in a singularity. Lynds contends that singularities never appear in nature, and the reason why he draws this conclusion is pretty much the key to his whole model. Assuming that the universe does contract toward a big crunch, Lynds explains that as the universe gets progressively smaller and, as a result, increasingly hotter, gravity would become so strong that nothing would escape. Which means, importantly, that heat would not escape.

Lynds uses a balloon analogy to illustrate his point, explaining that the hot air inside a balloon would become denser as the balloon continued to contract. But the balloon eventually reaches a critical point where the balloon bursts, and the hot air is released to merge with the cooler air. Ok, nothing new here. But Lynds goes on to explain that when applied to a closed universe, with (unlike the balloon), nothing beyond its self-contained boundaries, there is nowhere for heat to escape to, and that "hot could not flow to cold" as would be expected. Continuing, Lynds says that: "As everything continued to become more and more condensed, heat could only flow, of itself, from hot to hotter," concluding that this situation would "suggest a violation of the second law of thermodynamics."

Lynds draws attention to the fact that people such as Stephen Hawking and Austrian astrophysicist Thomas Gold reasoned that if the second law were to be breached, then all physical processes would go into reverse, or, to put it another way: "that events would take place in the direction in which entropy was decreasing, rather than increasing as we observe today." Gold and Hawking further assumed that entropy would continue to decrease as the universe contracted toward a big crunch. But as Lynds points out, if the one-way, asymmetric, irreversible second law does hold, then entropy should continue to increase regardless. In this respect, Lynds contends that rather than breaching the second law, where entropy may be forced to decrease rather than increase, "the order of events should simply reverse."

A. Universe expands from the big bang.
B. Point at which, as the universe approaches a big crunch (C), the second law of thermodynamics would be breached in direction B to C.
C to B. Order of events reverse so entropy can continue increasing. Universe expands from big crunch (reversed) with no singularity being encountered, very quickly reaching original point at which the second law of thermodynamics would have been breached had events not reversed.
A to B. Faces order of events in which entropy is decreasing (B to A). Rather than second law being breached, the order of events reverse once more, with no big bang singularity being encountered.

It is this reasoning that has given rise to Lynds' conclusion that no singularity can ever be reached, as events would be reversed before the second law could be breached. The implication of this, if you haven't already guessed, is that the reversing of events at the first available opportunity would represent the big bang, with the added implication that this process not only leads the universe toward the big bang, but also causes it. Following from this, he says, is the expansion and development of a universe identical in every way to the last one. But even more important, according to Lynds, is the realization that what we are really saying is that the big crunch caused the big bang, as well as being equally true to say that the big bang caused the big crunch. Voila! Our contrived notions of past and present become redundant. "One is now faced with a universe that has neither a beginning nor end in time," contends Lynds, "but yet is also finite and needs no beginning. The finite versus infinite universe paradox of Kant completely disappears." Lynds model also shows that time travel is not possible.

These revelations imply that the universe is non-cyclic. "Crucially, if one thinks about what is actually happening in respect to time, no universe is in the future or past of another one. It is exactly the same version, once, and it is non-cyclic," explains Lynds. "There is no infinite number of universes. It is one in the same." Not one to be hung up on semantic hair-splitting, Lynds puts such classifications down to our inherent concept of time. "If the past and future are thought of in a regular way, with a meaningful differentiation being made between them, then the model can be interpreted as being cyclic," says Lynds. "If properly taking into account what is happening in respect to time in it, however, the model means that the universe happens only once. I guess that it will probably be classed as being cyclic, though, and that's fine."

Aside from such relatively trivial problems as finding an appropriate name for the model, and more profound problems such as not ever being able to test it, Lynds has identified at least one potential problem with his model. After a cursory glance at the model, some people may view Lynds' universe as somehow being able to "anticipate future or past events in exact detail, and then play them over at will. How could the universe possibly know?" But Lynds' response to this is to just reiterate what his model represents, which is a universe with no past, present, or any one moment that is any more special than another; "all events and times in the universe would already be mapped out," he says.

But are there any other problems with Lynds' model? What about black holes, aren't they a glaring example of a singularity in nature? After all, no less than Roger Penrose proposed in 1965 that if Einstein's general theory of relativity was correct, then a singularity must reside in the heart of a black hole. While Lynds appreciates the similarities between a black hole and a big crunch, rather than conceding that a big crunch must also contract into a singularity, he contradicts Penrose by again outlining the mechanics behind his own model; this time applying it to black holes.

A to B. Matter falls into black hole, beyond its event horizon.
B. Point at which, as matter approaches black hole singularity (C), the second law of thermodynamics would be breached in direction B to C.
C to B. Order of events reverse so entropy can continue increasing. Matter moves outwards from where black hole singularity would have been had events not reversed, with no singularity being encountered.
C to B. Matter reaches original point at which the second law of thermodynamics would have been breached had events not reversed (B), and faces order of events B to A with entropy decreasing in this direction. As the outer region is the dominant system, order of events B to C reverses again.

But Lynds also says that a black hole and a big crunch are really quite different scenarios, as a black hole represents a very localized area of space, while a big crunch represents the entire universe (think back to Lynds' balloon analogy). "This would suggest," explains Lynds, "that as events reached this point inside the black hole, because the region outside of the reversed region would easily be the dominant system, the order of events of the universe outside would take precedence and not be reversed." This would mean that no matter would be able to escape once it has entered the reversed region of a black hole, even though matter could still enter from the universe outside. "As soon as it entered, however, it would immediately be reversed: instead of contracting towards a singularity, it would be moving away from it," adds Lynds.

But while Lynds may be able to present a case for black holes that is consistent with his model, there is one other problem that may yet close the door on his cyclic model: dark energy.

It was Adam Reiss, professor of physics and astronomy at Johns Hopkins University, who first proposed dark energy in 1998, and it is considered to be the mysterious force that is responsible for the acceleration and infinite expansion of the universe. Dark energy is consistent with Einstein's earlier, but later abandoned, concept of the cosmological constant, which acts as a negative repulsive force, or a kind of anti-gravity. "We watch this cosmic tug-of-war on the largest possible scales, on the scale of the whole universe," said Reiss in a recent radio interview, "and we see how dark matter and dark energy fight each other as they try to make the universe either expand faster, in the case of dark energy, or slow down and stop expanding, in the case of dark matter."

But Lynds is not entirely alone as Reiss believes that more needs to be understood about dark energy before anyone can be sure that continued acceleration and expansion of the universe will continue. Asked by BBC's Sue Broom what lay ahead, knowing what he does about dark energy, Reiss replied: "We are faced with the problem that we don't understand the basic physics of the dark energy. And so, we don't know whether it's static, like Einstein predicted, or whether it is changing in strength. If it is, if it does turn out to be Einstein's model - that there's energy in the vacuum of space - then over time there will only be more and more space, so more and more of this energy. And so, if that's the case, the universe will expand forever; it will accelerate so that eventually galaxies will be so far apart that light won't even travel between them. But it's also possible that dark energy is changing in its strength, and so then all bets are off. I mean we really have to understand dark energy before we can predict the future."

But until new understanding does come to light, we are left to ponder, if correct, the implications of Lynds' new model of the universe. How, if at all, does it change the way that we view the universe? How comfortable are we with the model's philosophical implications, where our lives are already mapped out before us? And does it even matter, since we really can be none the wiser of our ultimate fate? Despite Lynds' model rendering the past, present, forward and backward meaningless, one thing's for sure; we are probably stuck with our concept of time. "In contrast to cultural and religious influences on our concept of it," says Lynds, "I think that we are stuck with our intuitive notions of time, as I think they are often inextricably linked to how we think and are psychologically wired." Somehow I find that very human sentiment far more comforting than the idea of a cold, yo-yoing cosmological immortality.