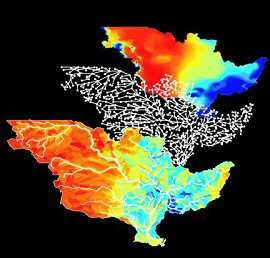 For their study, the researchers examined the Mississippi-Missouri river basin, which covers all or part of 31 US states, spanning diverse habitat types and encompassing very different environmental conditions. Using geomorphological data from the US Geological Survey, the researchers identified 824 sub-basins in the network. In these, the simple presence (or not) of 433 species of fish was established from a database of US freshwater fish populations. Data on the average runoff production -the amount of rainfall that ends up in the river system and not evaporated back into the air – was then used to calculate the habitat capacity of each sub-basin.

With just four parameters, it’s “an almost ridiculously simple model,” explains researcher Andrea Rinaldo. The model results were compared to extensive data on actual fish species distributions. Various different measures of biodiversity were analyzed, and the researchers were surprised to find that the model captured these complex patterns quite accurately. The model is all the more remarkable for what it does not contain – any reference, anywhere, to the biological properties of individual fish species.

“These results are a powerful reminder of the overarching importance of water, and the water-defined landscape, in determining patterns of life,” said co-researcher Ignacio Rodriguez-Iturbe. “It provides a framework that could be used to connect large scale environmental changes to biodiversity. Changes in precipitation patterns, perhaps due to global climate change, could be mapped to changes in habitat capacities in the model, ultimately providing a way to estimate how climate change would alter large-scale patterns of biodiversity. It could also be used for an assessment of the impact of specific, local human activities, such as flow re-routing or damming, on the biodiversity patterns in a river network.”