You are here: Home › News › Physics › Physics community buzzing over possible new particle
By Will Parker on April 8, 2011 in News, Physics 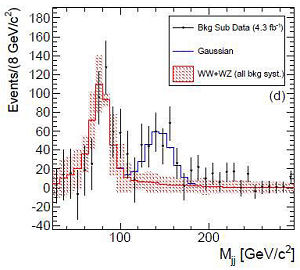 Experiments at Fermilab’s soon-to-be-mothballed Tevatron particle accelerator in the United States have produced collision outcomes that indicate the existence of a new, unknown particle that is not predicted by the fundamental laws of physics. The findings have been posted to Arxiv and have been submitted for publication in the journalPhysical Review Letters.

The researchers say the new particle is evidenced by a peak in the data from particle collision events that produce a W boson accompanied by two hadronic jets. The peak showed up in a mass region where the researchers say one should not exist. The peak was observed in the 140 GeV/c2 mass range, as shown in the plot above. It is the kind of peak, say the researchers, that is associated with the existence of a particle. They add that the nature of the peak excludes the possibility that it is a Standard Model Higgs boson or a supersymmetric particle.

“When you look at the data it’s not some disagreement with the Standard Model, it’s a nicely formed bump in the distribution that looks really like the kind of bump you’d get if a new particle was being exchanged in this process,” said Fermilab’s Dan Hooper. “There’s a 0.1 percent chance that this is a statistical fluke. Other than that possibility that lingers, this is the most exciting new physics we’ve learned about in my lifetime.”