You are here: Home › News › Physics › New uncertainty over uncertainty principle
By Will Parker on September 8, 2012 in News, Physics 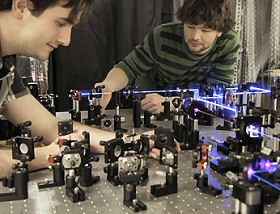 One of the fundamental tenets of quantum mechanics, Werner Heisenberg’s uncertainty principle, is being challenged by University of Toronto researchers who say that Heisenberg may be incorrect. Their work, involving the use of the “weak measurement technique,” is detailed in the journal Physical Review of Letters.

Heisenberg’s uncertainty principle states that it is impossible to measure anything without disturbing it. For instance, any attempt to measure a particle’s position must randomly change its speed. The principle has been a thorn in the side of physicists for nearly a century, but the new research indicates that Heisenberg may have been too pessimistic.

“We designed an apparatus to measure a property – the polarization – of a single photon. We then needed to measure how much that apparatus disturbed that photon,” explained lead author of the new study, Lee Rozema. “To do this, we would need to measure the photon before the apparatus but that measurement would also disturb the photon.”

In order to overcome this hurdle, Rozema and his colleagues employed a technique known as weak measurement where the action of a measuring device is weak enough to have an imperceptible impact on what is being measured. Before each photon was sent to the measurement apparatus, the researchers measured it weakly and then measured it again afterwards, comparing the results. They found that the disturbance induced by the measurement is less than Heisenberg’s precision-disturbance relation would require.

“Each shot only gave us a tiny bit of information about the disturbance, but by repeating the experiment many times we were able to get a very good idea about how much the photon was disturbed,” says Rozema.

The findings build on other recent challenges to Heisenberg’s principle by scientists around the world. Nagoya University physicist Masanao Ozawa suggested in 2003 that Heisenberg’s uncertainty principle does not apply to measurement, but could only suggest an indirect way to confirm his predictions. A validation of the sort he proposed was carried out last year by Yuji Hasegawa at the Vienna University of Technology.

In 2010, Australian scientists Austin Lund and Howard Wiseman showed that weak measurements could be used to characterize the process of measuring a quantum system. However, there were still hurdles to clear as their idea effectively required a quantum computer.

“In the past, we have worked experimentally both on implementing weak measurements, and using a technique called ‘cluster state quantum computing’ to simplify building quantum computers. The combination of these two ideas led to the realization that there was a way to implement Lund and Wiseman’s ideas in the lab,” says Rozema.

It is often assumed that Heisenberg’s uncertainty principle applies to both the intrinsic uncertainty that a quantum system must possess, as well as to measurements. The new findings indicate that this is not the case and demonstrate the degree of precision that can be achieved with weak-measurement techniques.

“The results force us to adjust our view of exactly what limits quantum mechanics places on measurement,” says Rozema. “These limits are important to fundamental quantum mechanics and also central in developing ‘quantum cryptography’ technology, which relies on the uncertainty principle to guarantee that any eavesdropper would be detected due to the disturbance caused by her measurements. The quantum world is still full of uncertainty, but at least our attempts to look at it don’t have to add as much uncertainty as we used to think!”

Related:
Discuss this article in our forum
Physicists grapple with limits to spookiness
Entanglement of single photon detected across four locations
Uncertainty