You are here: Home › News › Physics › Novel synchrotron X-ray generator could revolutionize security, medicine
By Will Parker on November 24, 2013 in News, Physics 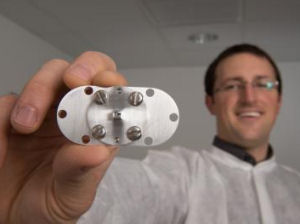 Compared to ordinary X-rays, synchrotron X-rays produce much higher quality images with less radiation, but traditional synchrotron X-ray devices are enormous and costly, available at only a few sites around the world. Now, researchers at the University of Nebraska-Lincoln (UNL) say they have designed a device that uses a compact laser to produce synchrotron X-rays.

The team who invented the device says it could lead to advanced applications in many fields; including high definition security scanning, earlier tumor identification, or the study of extremely fast reactions that occur too rapidly for observation with conventional X-rays.

In traditional synchrotron machines, electrons are accelerated to extremely high energy and then made to change direction periodically, leading them to emit energy at X-ray wavelength.

Pursuing an alternative approach, the UNL team replaced both the electron accelerator and the deflector magnets with laser light. They first focused their laser beam onto a gas jet, creating a beam of relativistic electrons. They then focused another laser beam onto the accelerated electron beam. This rapidly vibrated the electrons, which in turn caused them to emit a bright burst of synchrotron X-rays (referred to as Compton scattering). Remarkably, the light’s photon energy was increased during this process by a million-fold. Impressively, the combined length of the accelerator and synchrotron was less than the size of a coin.

“The X-rays that were previously generated with compact lasers lacked several of the distinguishing characteristics of synchrotron light, such as a relatively pure and tunable color spectrum,” explained researcher Donald Umstadter. “Instead, those X-rays resembled the ‘white light’ emitted by the Sun.”

The new laser-driven device, detailed in the journal Nature Photonics, produces X-rays over a much larger range of photon energies, extending to the energy of nuclear gamma rays. Few conventional synchrotron X-ray sources are capable of producing such high photon energy.

The key to the breakthrough, says Umstadter, was finding a way to collide the two micro-thin beams – the scattering laser beam and the laser-accelerated electron beam. “Our aim and timing needed to be as good as that of two sharpshooters attempting to collide their bullets in midair,” he explained. “Colliding our ‘bullets’ might have even been harder, since they travel at nearly the speed of light.”

Umstadter compares the X-ray breakthrough to the development of personal computers, giving more people access to computing power once available only via large and costly mainframe computers. “Shrinking components of advanced laser-based technology will increase the feasibility of producing high-quality X-rays in medical and university research laboratories, which in turn could lead to new applications for the X-rays,” he said.

“Our hope is that this new technology will lead to applications that benefit both science and society,” added co-researcher Nathan Powers (pictured).