You are here: Home › News › Physics › LHC may produce time travelling particles
By Will Parker on March 16, 2011 in News, Physics 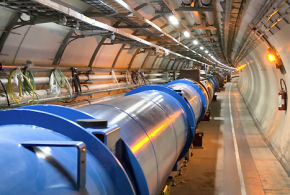 If the Large Hadron Collider (LHC) does produce the elusive Higgs boson, then Vanderbilt University physicists speculate that it will also create a second particle, known as the Higgs singlet, that can move either forward or backward in time and reappear in the future or past. “Our theory is a long shot,” admitted Vanderbilt Physics professor Tom Weiler, “but it doesn’t violate any laws of physics or experimental constraints.”

The theory should be easy to test. If Higgs singlet particles and their decay products start spontaneously appearing at the LHC then Weiler and Ho believe that they will have been produced by particles that travel back in time to appear before the collisions that produced them.

The time travel idea is based on M-theory, a favored contender for a “theory of everything.” Theoretical physicists have developed M-theory to the point that it can accommodate the properties of all the known subatomic particles and forces, including gravity, but it requires 10 or 11 dimensions instead of our familiar four. This has led to the suggestion that our universe may be like a four-dimensional membrane or “brane” floating in a multi-dimensional space-time called the “bulk.”

In M-theory, the basic building blocks of our universe are permanently “stuck” to the brane and so cannot travel in other dimensions. There are some exceptions, however, such as the proposed Higgs singlet, which responds to gravity but not to any of the other basic forces. 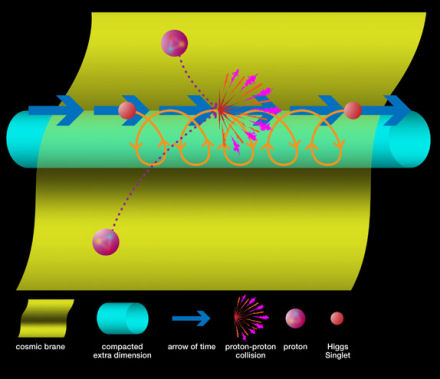 Weiler began looking at time travel six years ago to explain anomalies that had been observed in several experiments with neutrinos. Neutrinos rarely interact with ordinary matter: trillions of neutrinos hit our bodies every second, yet we don’t notice them because they zip through without affecting us.

These sterile neutrinos travel faster than light by taking shortcuts through extra dimensions, explains Weil. According to Einstein’s general theory of relativity, there are certain conditions where traveling faster than the speed of light is equivalent to traveling backward in time.

If Weiler and his co-researcher Chui Man Ho are right, then the Higgs singlet could open the door to some fascinating sci-fi-like scenarios. “One of the attractive things about this approach to time travel is that it avoids all the big paradoxes,” Weiler said. “Because time travel is limited to these special particles, it is not possible for a man to travel back in time… but if scientists could control the production of Higgs singlets, they might be able to send messages to the past or future.”