The Universe As Magic Roundabout 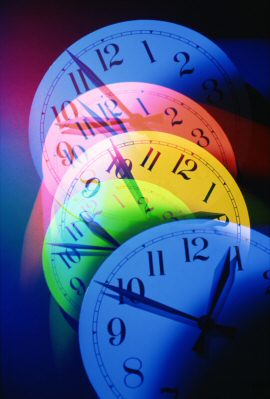 Ever feel like you've been there, done that, and that the life you're living seems strangely familiar? Maybe a psychic has told you that you were once a great king or queen, or, at the very least, their eunuch. Perhaps a neurologist has told you that the déjà vu that you're experiencing is just a trick of the mind. But while these explanations may appeal to either the spiritually or scientifically inclined, physicist Peter Lynds argues that there may be a much grander account that explains the repetitiveness of life: a cyclic universe. In this, the first part of two articles, we look at what Lynds considers to be both vital and overlooked cosmological questions regarding the origin and mechanics of a cyclic universe.

Of course, referring to past lives and déjà vu is being a tad flippant in regard to Lynds' new paper on a cyclic universe, "On A Finite Universe With No Beginning Or End," as these areas, he explains, are really the philosophical fallout - determinism, free will, and life after death - of his new theory. In a nutshell, the model of the universe that Lynds is proposing, similar to others before him, is that the universe is in fact closed and subject to an infinite cycle of big bangs and big crunches. However, the difference between Lynds' theory and those that have gone before it is that in Lynds' model the big bang is no more the beginning of the universe than the big crunch is its end. Lynds explains, as suggested by paper's title, that while the universe is finite, there is no arrow of time; there is no past or present, and that in neither a big crunch nor big bang is a singularity ever reached.

Lynds' latest cosmological rumination follows a previous paper he wrote on time, and it's sure to spark up just as much controversy. In his earlier paper, Lynds argued, in effect, that time doesn't really exist. That is to say, there are no discrete measurements of time that can be observed in nature, and that our concepts of it are dependent upon the relative motions of mass and energy. His latest effort continues along these lines, arguing that our linear concept of time - firmly established with the introduction of the Christian calendar - has, effectively, blinkered us from the possibility of a cyclic universe. At this point, Lynds' critics are sure to be thinking that he's up to his old tricks again, but he introduces some very solid arguments, employing no less than the second law of thermodynamics to support his claims.

Lynds' paper opens with a paradox raised by the German philosopher Immanuel Kant, who pondered two competing, yet similarly contradictory theories of the universe. Kant was faced with either a universe that stretched back infinitely through time, where there would be an infinite period of time before any event (a procrastinator's dream), or, of a universe that did have a beginning, but which has an equally dissatisfying outcome, as it begs the question of what came before the "beginning," ad infinitum. Lynds explains that the genius of Kant's paradox is yet to be properly realized, as through proper investigation it should tell us something about our most fundamental assumptions regarding time, cause and cosmology. To this end, Lynds' model attempts to address the rather curly issue of where the universe came from, and the problems associated with both a finite and infinite universe through his model of a cyclic universe.

Casting an eye over previous attempts at explaining the mechanics of a cyclic universe, Lynds turned to Stephen Hawking. Lynds relates how Hawking once discussed how the second law of thermodynamics might affect the future of a contracting universe (towards a big crunch). The second law of thermodynamics is one of those rock-solid physical laws, the big gun that a scientist may use to quell the pseudo-scientific flights of fancy held by the reality challenged. As Lynds explains, the law states that "heat can never pass spontaneously, or of itself, from a hot to hotter body. Hot flows to cold." This means two things: that the one-way direction of energy transference involved in natural processes is irreversible, and that the entropy of an isolated system will increase with time.

Initially, Hawking concluded that if the universe did begin to contract then the thermodynamic "arrow of time," as it is often called (erroneously, according to Lynds), would also reverse. "Everything would go into the reverse of the way we experience things today: light would travel back to the stars, and broken eggs on the floor would miraculously put themselves back together again," says Lynds. Philip K. Dick, of Blade Runner fame, once wrote about a similar situation in his novel Counter-Clock World, where many of the consequences of time reversal - such as dead relatives and feces taking up, er, previously held positions in your life (to be honest, I'm not sure which would be worse) - seem quite unpalatable. Hawking stated that such a reversal would mean that hot would flow to hotter, and that entropy would need to decrease because, as Lynds explains, "the universe would have to return to a symmetrical state of low entropy and high order at a big crunch." Thankfully, the unfolding of such an unsavory scenario is unlikely due to a number of impossible situations that would arise, not least of which being that it would require that entropy decrease and thus break the second law of thermodynamics. As Lynds points out, Hawking called this "his greatest mistake."

In his model, Lynds manages to account for, or perhaps dodge, the irreversible, asymmetric nature of the second law of thermodynamics in a rather novel way. Lynds reasons that if all other physical laws other than the second law are reversible, or symmetric, then when the universe is faced with a situation where entropy may have to decrease instead of increase; "the order of events would simply reverse so that events took place in the direction in which entropy was still increasing," says Lynds. "In relation to the big crunch, this would mean that at the point where the second law would have been breached, any future events in this direction (where entropy would be decreasing) would reverse."

Just how Lynds explains the mechanics behind such a scenario, and whether we would be spared the horror of being cast headlong into Philip K. Dick's world, is the topic for next week's column.