You are here: Home › News › Fungi Enlisted To Clean-Up Depleted Uranium
By Will Parker on May 8, 2008 in News 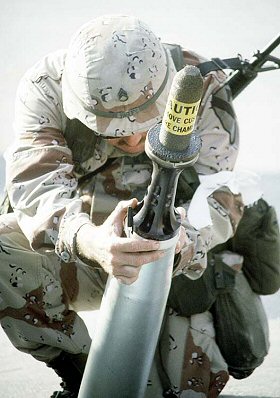 In a discovery that could have important implications for the clean-up of war ravaged countries, researchers have found evidence that fungi can “lock” depleted uranium into a mineral form that would be less likely to find its way into plants, animals, or the water supply.

Depleted uranium is a byproduct of the enrichment process used to create uranium 235, the isotope which is used in nuclear weapons and reactors. It is almost twice as dense as lead, giving it enough kinetic energy to blast through the tough armor of a tank. The Department of Energy considers depleted uranium to be a “waste material” and it is freely available to munitions manufacturers. In munitions, depleted uranium pulverizes into a fine dust upon impact; where it can be inhaled, or seep into the soil.

Estimates of depleted uranium in Iraq alone total more than 2,000 tons, with other regions around the world such as the Balkan states also affected. Depleted uranium is linked to birth defects and has an estimated half-life of 4.5 billion years.

There has been little investigation into how an affected environment could be cleaned up after a conflict, but recent work, published in Current Biology, by researchers at the University of Dundee in Scotland indicates that nature may be able to lend a hand. “This work provides yet another example of the incredible properties of microorganisms in effecting transformations of metals and minerals in the natural environment,” said Dundee’s Geoffrey Gadd. “Because fungi are perfectly suited as biogeochemical agents, often dominate the biota in polluted soils, and play a major role in the establishment and survival of plants through their association with roots, fungal-based approaches should not be neglected in remediation attempts for metal-polluted soils.”

In the new study, the researchers found that free-living and plant symbiotic (mycorrhizal) fungi can colonize depleted-uranium surfaces and transform the metal into uranyl phosphate minerals. “The fungal-produced minerals are capable of long-term uranium retention, so this may help prevent uptake of uranium by plants, animals, and microbes. It might also prevent the spent uranium from leaching out from the soil,” explained Gadd.

The process involves a combination of environmental and biological factors. First, the unstable uranium metal gets coated with a layer of oxides. Moisture in the environment also “corrodes” the depleted uranium, encouraging fungal colonization and growth. While the fungi grow, they produce acidic substances, which corrode the depleted uranium even further. Some of the substances produced include organic acids that convert the uranium into a form that the fungi can take up or that can interact with other compounds. Ultimately, the interaction of soluble forms of uranium with phosphate leads to the formation of the new uranium minerals that get deposited around the fungal biomass.

“We have shown for the first time that fungi can transform metallic uranium into minerals, which are capable of long-term uranium retention,” the researchers concluded. “This phenomenon could be relevant to the future development of various remediation and revegetation techniques for uranium-polluted soils.”

Biodiversity: It’s In The Water
Folding Proteins For Fun And Profit