You are here: Home › News › Super Bacteria Created In Zero-Gravity
By Will Parker on September 25, 2007 in News 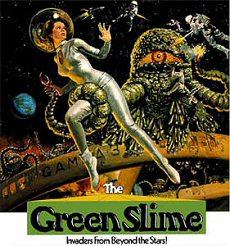 Nickerson and co-researcher James Wilson performed the first study of its kind to investigate the effect of space flight on the genetic responses and disease-causing potential of Salmonella typhimurium, the main bacterial culprit of food poisoning. Their results, published in the journal Proceedings of the National Academy of Sciences, reveal a key role for a master regulator, called Hfq, in triggering the genetic changes that show an increase in the virulence of Salmonella as a result of spaceflight.

“The bacterial cultures were taken up into space and activated to grow,” explained Nickerson. After the bacteria returned to Earth, the group performed the first global analysis of Salmonella to measure the effect of space flight on gene and protein expression and virulence. “We chose to measure gene expression at the mRNA level since the technique to do this is a highly advanced and convenient way to quantitatively measure the expression of every gene in a single experiment,” said Wilson.

“It is a very powerful technique that was very applicable to the spaceflight experiment. The isolation of mRNA poses particular challenges since it is very sensitive to degradation, but we designed the experiment using a fixative that preserved the mRNA very well.”

Compared to bacteria that remained on earth, the space-traveling Salmonella had changed expression of 167 genes. After the flight, animal virulence studies showed that bacteria that were flown in space were almost three times as likely to cause disease when compared with control bacteria grown on the ground.

The researchers say that the regulatory protein, Hfq, may be a key molecule responsible for the increased virulence. “Hfq is a protein that binds to and regulates a number of regulatory RNAs, which in turn, control gene expression,” said Nickerson. “Our studies suggest that there may be a role for these regulatory RNAs in the cellular response to the physical and mechanical forces found in spaceflight, which are relevant to conditions that cells encounter here on Earth during the normal course of their lifecycles.”

These results have important implications for human health since Salmonella (and other gut-related bacterial pathogens) are a leading cause of food-borne illness and infectious disease. In addition, the space flight studies may shed new light on why Salmonella has become increasingly resistant to antibiotic treatment. “We also studied the morphology of the bacteria in response to space flight, and the change that we observed is consistent with what looks like formation of a biofilm. The ground grown samples did not show biofilm formation. Biofilms are associated with increased pathogenicity because the immune system can’t clear the bacteria effectively and antibiotics don’t treat them effectively,” explained Nickerson.