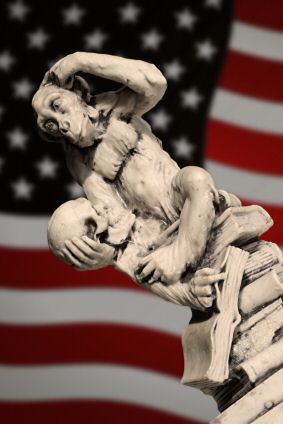 With genomics progressing in leaps and bounds, scientists are growing impatient with naturally occurring evolution. Instead of waiting for nature's sluggish hit-and-miss process of producing a viable adaptation or mutation, researchers have shown that it may one day be possible to engineer evolutionary processes in a fraction of the time. Specifically, recent research on synthetic proteins indicates the scary prospect that there may be no limits or time constraints on human evolution - should we so choose.

It's amazing to think how far life has come since (supposedly) springing from that primordial bouillabaisse of crude chemical building blocks three-billion years ago. As it simmered away, various proteins comprised of 20 standard amino acids formed, with each type of protein determined by the sequence of the amino acid chain. From these humble beginnings, all life as we know it eventually emerged, thanks to the engine of evolution.

But life's too short to hang around waiting for the next big evolutionary development; and it's equally frustrating listening to all those creationist naysayers, who harp on about why they haven't witnessed any evolutionary changes in their lifetime. Hmm, if only there was a way to accelerate evolution a notch or two...

As it happens, a research team from the Biodesign Institute has accomplished just that, after successfully evolving - or as the team calls it, "synthetic evolution" - a number of new proteins from scratch in a ridiculously short period of time. Team leader, John Chaput, who is also assistant professor in Arizona State University's department of chemistry and biochemistry, explained that the initial objective of their research was to comprehend some fundamental questions regarding the origin and evolution of proteins. "Would proteins that we evolve in the lab look like proteins we see today in nature, or do they look totally different from the set of proteins nature ultimately chose," ponders Chaput. "By gaining a better understanding of these questions, we hope to one day create new tailor-made catalysts that can be used as therapeutics in molecular medicine or biocatalysts in biotechnology."

Protein research and engineering has been gaining traction over the years, with an increasing number of institutions researching how to produce organisms for a variety of imagined applications; including medicine, industry, agriculture, the environment, and, of course, the battlefield.

Progressive developments in protein research have earned these endeavors the moniker "synthetic biology." Duke University's Associate Professor of Biochemistry, Homme Hellinga, used the term in a paper where he discussed things like "biological sentinels" that could be used to measure glucose levels in diabetes patients. "Such scenarios might sound like something out of science fiction, but they are entirely feasible over the long-term using computational design approaches to create sensor proteins," explained Hellinga. But while improving and expediting nature may be all the rage at the moment, it comes with its own set of complex problems.

The two big hurdles of protein folding and stability were already known to biologists. The first problem is predicting precisely how a string of 20 unique amino acids - which provide a protein with its globular shape, function, and stability - manages to "fold" to make the 3-D functional structure of a protein. The second problem, stability, relates to how a protein segment binds its target molecule adenosine triphosphate (ATP). "It turns out that protein stability is a major problem in biology," explained Biodesign Institute's Chaput. "As many as half of the 30,000 genes discovered from the human genome project contain proteins that we really don't know what their structure is or whether or not they would be stable. So for our goal, we wanted to learn more about the evolution of protein folding and stability." Fortuitously, the team managed to more or less resolve both unknowns simultaneously, by forcing nature's hand a little.

The first thing Chaput did was to repeat an experiment from 2001, where he and his colleagues successfully accelerated protein evolution, but later found the protein to be unstable. "In these experiments we explore how functional proteins evolve by imposing a selective pressure on a diverse population of unrelated sequences to enrich for molecules with a desired functional property," explains Chaput.

The accelerated process of finding a couple of new proteins begins with creating a "library" of random amino acid sequences totaling 400 trillion. Unlike the previous experiment, Chaput added a host of extra environmental pressures, which made it impossible for all but 10 percent of the proteins to be able to bind with their target. In doing this, Chaput was ostensibly creating an artificial natural selection process, where only the "fittest" ATP binding protein fragments remained. "We call this approach de novo [afresh or anew] protein evolution since the in vitro process of selection and amplification closely mimics the natural process of Darwinian evolution," says Chaput.

Surprisingly, Chaput observed that it was only two amino acid changes that made the difference when it came to resolving the binding and stability issue. Chaput and his colleagues found that after accelerated evolution, the remaining protein fragments, dubbed DX, were more stable and were able to bind ever more tightly than anything nature has so far produced. "No one could have predicted that these two amino acid changes would improve the function of the DX protein compared to the parent," noted Chaput.

This discovery means that science is now in a position to try and improve upon, or enhance, nature. "We have the distinct advantage over nature of being able to freeze the evolution of our lab-evolved proteins at different time points to begin to tease apart this random process and relate it to the final protein function," says Chaput.

Scientists are now busying themselves with plans to evolve all manner of synthetic proteins for all sorts of applications. But are we ready for such an evolutionary leap? And perhaps it might be pertinent to ask if it's wise for us to try and turbo-charge nature.