You are here: Home › News › Astronomers Scope The Weather On Extrasolar Planet
By Will Parker on October 13, 2006 in News 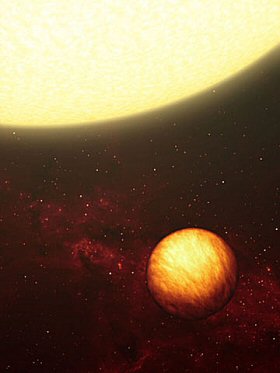 Astronomer Joseph Harrington, of the University of Central Florida, has reported the first direct observation of distinct day and night temperatures on a planet orbiting another star. Unfortunately, the extrasolar (outside our solar system) planet doesn’t look to be very hospitable, as the temperatures range over 2,500 Fahrenheit between the night and day sides.

Harrington and others performed their long-range weather assessment with the help of NASA’s Spitzer Space Telescope, using it to measure the infrared light emitted by the planet – known as upsilon Andromedae b – at five points around its orbit. Upsilon Andromedae b orbits a star located 263 trillion miles from Earth in the constellation Andromeda.

Upsilon Andromedae b orbits very close to its parent star and is known as a “hot Jupiter” type planet. “How they absorb and reradiate this energy is fundamental to understanding the behavior of their atmospheres,” Harrington said. “Studying planetary atmospheres under such exotic conditions puts terrestrial and solar-system meteorology into a universal context, which aids in our understanding of weather on all planets,” he added.

Previous models of planetary atmospheric conditions predicted that strong winds transport energy from the day side to the night side. “But, our points are almost exactly synced up with the known orbit, which indicates almost immediate reradiation of energy, very little energy transport,” Harrington said. “That’s new, and very exciting. The temperature difference between day and night is also very strong, which is more evidence for immediate reradiation.” Why the old models don’t work for upsilon Andromedae b is a question the team hopes to eventually answer. “That’s going to be a hot topic now,” Harrington said.

Since 1995, more than 200 extrasolar planets have been found, but scientists still cannot see the planets as separate images from their stars. “In the past, we could only directly measure planets that happened to pass in front of and behind their stars from our point of view,” Harrington said. “That only works for certain planets, and only at two points in the orbit. Our new method doesn’t have those limitations, which opens up opportunities to observe more planets, and to get data all around their orbits. We need that to learn how their atmospheres work.”

When will someone discover an Earth-like planet with a temperature that could support life as we know it? “It may not be that long of a wait,” Harrington said. “NASA’s Kepler mission [scheduled for launch in October 2008] should find several such planets, but technology is moving so fast, it could be that someone else does it first.”