You are here: Home › News › Swimming Critters Add New Variable To Climate Confusion
By Will Parker on October 16, 2006 in News

Phytoplankton – the microscopic plants that form the foundation of the marine food chain – generate an astonishing amount of power, report oceanographers from Florida State University (FSU). FSU’s Professor William Dewar has calculated that the little critters generate about five times the annual total power consumption of the human world. He added that the yearly amount of chemical power stored by phytoplankton in the form of new organic matter was roughly 63 terawatts. By comparison, in 2001, humans collectively consumed around 13.5 terawatts. 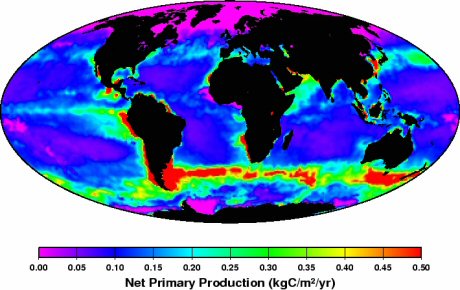 This microscopic powerhouse, already acknowledged as an important player in the climate debate, now looks to also play a key role in keeping the world’s oceans circulating. Dewar estimates that the marine biosphere (the chain of sea life anchored by phytoplankton) invests around 1 terawatt in mechanical energy – swimming motions – that mix the world’s oceans much as cream is stirred into coffee by swiping a spoon through it.

“We have predicted, theoretically, that the amount of mixing caused by ocean swimmers is comparable to the deep ocean mixing caused by the wind blowing on the ocean surface and the effects of the tides,” Dewar explained. In other words, this biosphere mixing appears to provide about one-third of the power required to bring deep, cold waters to the surface, which in turn completes the ocean’s conveyor belt circulation critical to the global climate system.

Phytoplankton acts as a reliable signal of environmental changes at, or near, the ocean surface through sudden declines or rapid growth – and scientists have suspected that phytoplankton affects as well as reflects climate change. In the future, phytoplankton levels are likely to be influenced by rising oceanic acidity and increasing temperatures.

Along with the new calculations that point to the marine biosphere’s bigger-than-expected role in ocean mixing and climate control, Dewar also suggests that thedecimation of whale and big fish populations may have had a measurable impact on the total biomixing occurring in the world’s oceans today.