You are here: Home › News › First Photo Of Planet Outside Our Solar System
By Will Parker on May 2, 2005 in News 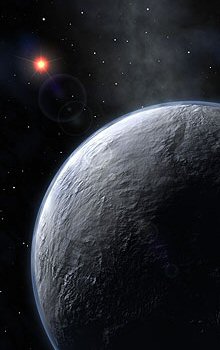 A team of astronomers has confirmed the discovery of a giant extra-solar planet, approximately five times the mass of Jupiter, that is gravitationally bound to a young brown dwarf star. The research, appearing in Astronomy and Astrophysics, puts an end to a year long discussion on the nature of this object, which started with the detection of a red object close to the brown dwarf in the constellation of Hydra, approximately 200 light years from Earth. The separation between the planet (left of pic) and the brown dwarf (center of pic) is 55 times the separation of the Earth and Sun.

At the time of its discovery in April 2004, it was impossible to prove that the faint source was not a background object, even though this appeared very unlikely. The object, now called 2M1207b, is more than 100 times fainter than the brown dwarf, 2M1207A. The spectrum of 2M1207b presents a strong signature of water molecules, thereby confirming that it must be cold. Based on the infrared colors and the spectral data, evolutionary model calculations led to the conclusion that 2M1207b is a 5 Jupiter-mass planet. The new observations show with high confidence that the two objects are moving together and hence, are gravitationally bound. “The two objects – the giant planet and the young brown dwarf – are moving together; we have observed them for a year, and the new images essentially confirm our 2004 finding,” says team member Benjamin Zuckerman. “I’m more than 99 percent confident.”

Earlier this year, the astronomers took new images of the young brown dwarf and its giant planet companion with the European Southern Observatory’s (ESO’s) Very Large Telescope in Chile. “Our new images show convincingly that this really is a planet, the first planet that has ever been imaged outside of our solar system,” said Gael Chauvin, the study team leader. “Given the rather unusual properties of the 2M1207 system, the giant planet most probably did not form like the planets in our solar system. Instead it must have formed the same way our Sun formed, by a one-step gravitational collapse of a cloud of gas and dust.”

Many of the team members are excited about what this means for future observations of extra-solar planets. “Our discovery represents a first step towards one of the most important goals of modern astrophysics: to characterize the physical structure and chemical composition of giant and, eventually, terrestrial-like planets,” said Anne-Marie Lagrange.