You are here: Home › News › Telescope Tag-Team Nets New Planets
By Will Parker on October 5, 2006 in News 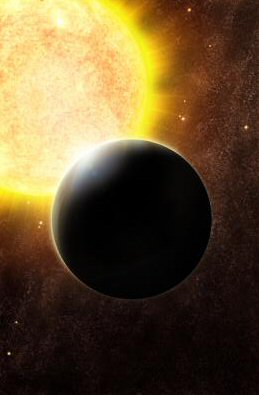 Astronomers using the European Southern Observatory’s (ESO) Very Large Telescope (VLT) have confirmed the extrasolar (outside our solar system) planet status of two of the 16 candidates discovered by the Hubble Space Telescope in a 2004 sweep of the sky. One of the new exoplanets has a mass a little below 10 Jupiter masses, while the other is around 3.8 Jupiter masses.

The 16 candidates were identified during a Hubble survey that looked at stars in the crowded central bulge of our Galaxy. Extrapolating the new findings to the entire galaxy indicates that the Milky Way contains an astonishing 6 billion Jupiter-sized planets.

Five of the sixteen newly discovered planets represent a new type of planet that has not been seen before. Dubbed Ultra-Short-Period Planets (USPPs), these worlds whirl around their stars in less than a day. The shortest-duration orbit is just 10 hours.

Locating the new planets was something of a tag-team effort by Hubble and the ESO’s VLT. The astronomers involved used Hubble to search for planets by measuring the slight dimming of a star due to the passage of a planet in front of it, known as a transit. These planets are called “candidates” because astronomers cannot be sure of their mass, hence of their status, without further spectroscopic measurements.

To ensure that the dimming was caused by an object orbiting a star, the team used Hubble to detect from 2 to 15 consecutive transits for each of the 16 planet candidates.

ESO’s VLT then confirmed each planet’s status by spectroscopically measuring a slight wobble in the star’s motion due to the gravitational pull of the planet. One of the planetary candidates has a mass of about 3.8 Jupiter masses. It orbits its host star, which is 25 percent more massive than the Sun, in 4.2 days. The other candidate’s mass is 9.7 Jupiter masses. “This result beautifully illustrates the synergy between the Hubble Space Telescope and the VLT, once the corresponding capabilities are exploited to their limit,” said astronomer Alvio Renzini.

The other fourteen planet wannabes will have to wait a little longer to have their status confirmed, however. “Because the stars are so faint and the field of view is so densely packed with stars, it is not feasible to use this radial-velocity method to confirm the other planet candidates,” said team leader Kailash Sahu. “To confirm them one would need a much bigger telescope on Earth, such as the Extremely Large Telescope currently under study at ESO and other observatories worldwide,” added Renzini.