You are here: Home › News › New Theory Predicts Plenty Of Earth-Like Planets
By Will Parker on September 8, 2006 in News 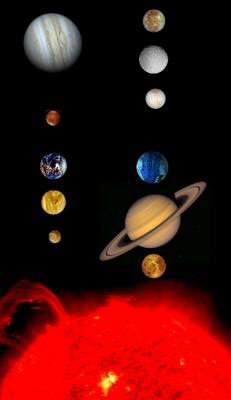 NASA scientists say that more than one-third of the giant planet systems recently detected outside Earth’s solar system may harbor Earth-like planets. Even more astonishing, they say that it’s quite likely that these Earth-like planets would have deep oceans with the potential for life.

The new projections come from calculations centered on gas giant planetary systems that contain a “Hot Jupiter;” a gas giant that orbits extremely closely to its parent star (an example Hot Jupiter system is pictured next to own solar system). Space scientist and study co-author Sean Raymond explained that such gas giants are believed to have migrated inward toward their parent stars as the planetary systems were forming, disrupting the space environment and triggering the formation of ocean-covered, Earth-like planets in a “habitable zone” conducive to the evolution of life. And because a whopping 40 percent of the 200 or so exosolar planets so far discovered are Hot Jupiters, there could well be scores of Earth-like planets in those systems.

Previously, scientists had believed that as Hot Jupiters plowed through proto-planetary material on their inward migrations toward parent stars, all the surrounding material would be “vacuumed up” or ejected from the system. “The new models indicate these early ideas were probably wrong,” said Raymond.

While the new study will likely attract controversy, upcoming space missions such as NASA’s Kepler and Terrestrial Planet finder and ESA’s COROT and Darwin will eventually characterize Earth-like planets around other stars, said the scientists. “We predict that a significant fraction of systems with close-in giant planets will be found to have a Hot Earth or potentially habitable, water-rich planets on stable orbits in the Habitable Zone,” they wrote in conclusion.