You are here: Home › News › Chilling Out To Cool Sounds
By Will Parker on December 5, 2002 in News 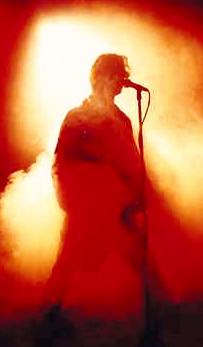 Beneath the warm sun on the Mexican Rivera, the idea of shouting at your ice cream to keep it cool seems entirely absurd. Amazingly, that is not very different from what two researchers from the Graduate Program in Acoustics at Penn State are suggesting in the paper they are presenting at an international acoustics meeting being held this week in Cancun, Mexico.

Researchers Matt Poese and Steve Garrett of Penn State’s Applied Research Laboratory (ARL) have described a small “thermoacoustic refrigerator” that is the prototype for point-of-sale ice cream cabinets that are being developed with financial support from Ben & Jerry’s and Unilever. The existing ice cream sales cabinets, as well as most of the world’s refrigerators and air conditioners, use chemical refrigerants that have been responsible for depletion of stratospheric ozone. Replacements for those chemicals that were banned in 1996 by international agreement, while not dangerous to the ozone layer, are global warming gases that are 3,000 times more potent than CO2.

The thermoacoustic refrigerator uses a souped-up loudspeaker to generate high amplitude sound energy in environmentally safe inert gas that is converted directly into useful cooling. What Poese and Garrett mean by “high amplitude sound waves” is far beyond what you normally encounter under ordinary circumstances. Using the logarithmic scale favored by acousticians, the threshold for pain is set at about 120 dB -the sound level near the stage at a rock concert.

At 165 dB, a sound level 30,000 times more intense, your hair would catch fire from the frictional heating caused by the gas undergoing such large acoustic oscillations. Poese and Garrett report sound levels nearly ten times more intense at 173 dB. Fortunately, none of that sound energy escapes their system. Even if the resonator failed, the sound could not reach your ears because those levels can only be generated by the resonance conditions maintained by the pressurized gas.

The idea of using sound to produce useful refrigeration got its start at Los Alamos National Laboratory in the early 1980’s. Since then, support from the US Department of Energy and the Office of Naval Research has produced a long series of advancements that has finally brought the efficiency of thermoacoustic devices to a level where they can be competitive with the conventional vapor-compression process in some niche applications. Efficiency is important, since elimination of the refrigerants that cause environmental damage to the atmosphere would be undermined if the new refrigeration technology is not at least as efficient as the technology it replaces. If it takes more power to run the thermoacoustic device, then ultimately more power needs to be generated at the power station and more CO2 will be put into the atmosphere.

Scott Backhaus and Greg Swift, two researchers at Los Alamos National Laboratories, made the breakthrough in thermoacoustic efficiency for engines that is being exploited at Penn State for refrigeration. They used a technology that was patented in England nearly two hundred years ago – the Stirling Engine. Backhaus and Swift used an acoustic network, instead of pistons and mechanical linkages, to produce an acoustic-Stirling heat engine that had no moving parts other than the acoustically oscillating gas. Swift was honored for his contributions to the development of thermoacoustics with the Silver Medal in Physical Acoustics at a meeting of the Acoustical Society of America held two years ago in Newport Beach, CA. His new textbook entitled, Thermoacoustics: a unifying perspective for some engines and refrigerators, will be available for the first time at this meeting.

Along with improvements in the thermoacoustic cycle efficiency, similar improvements in the efficiency with which sound can be generated from electric power have been made. The efficiency of a loudspeaker used for musical reproduction is typically less than 1%. This poor performance is due in part to the difficulty of coupling a moving rigid surface, such as the loudspeaker’s cone, to air that is very “squishy” by comparison. Loudspeakers are also inefficient because they are required to produce a very large range of frequencies at similar levels – from the low notes produced by a bass or tuba to the high tones of a triangle or piccolo.

Loudspeakers used in thermoacoustics do not need to produce a range of frequencies, so their efficiency can be improved by operating them at resonance. The Penn State group has developed loudspeakers that operate near their natural resonance frequencies and use metal bellows that replace loudspeaker cones to compress the gases. Their loudspeakers have demonstrated efficiencies as high as 89% at powers as large as 5 kilowatts – the equivalent of nearly seven horsepower. All of this power is produced without lubricants or sliding seals so it has the potential for very long life and low maintenance operation.

The system described by Poese and Garrett is one more step in the development of thermoacoustic devices that started more than twenty years ago. With the discovery of the ozone hole and growing fears about the effects of global warming, what began as basic research on the fundamental connections between sound waves and heat transport is getting closer to providing an environmentally benign substitute for traditional engine and refrigeration technology in some applications. Today we are “shouting” at ice cream; tomorrow acousticians may be expanding their repertoire with some very cool tunes.