You are here: Home › News › Planets Formed In Hundreds – Not Millions – Of Years
By Will Parker on December 2, 2002 in News 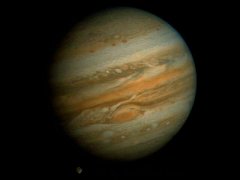 An accepted assumption in astrophysics holds that it takes more than 1 million years for gas giant planets such as Jupiter and Saturn to form from the cosmic debris circling a young star. But new research suggests such planets form in a dramatically shorter period, as little as a few hundred years.

The forming planets have to be able to survive the effects of nearby stars burning brightly, heating and dispersing the gases that accumulate around the giant planets. If the process takes too long, the gases will be dissipated by the radiation from those stars, said University of Washington astrophysicist Thomas R. Quinn.

“If a gas giant planet can’t form quickly, it probably won’t form at all,” he said.

The standard model of planet formation holds that the spinning disk of matter, called a protoplanetary disk, that surrounds a young star gradually congeals into masses that form the cores of planets. That process was thought to take a million years or so, and then the giants gradually accumulate their large gaseous envelopes over perhaps another 1 million to 10 million years.

But the new research, culled from a much-refined mathematical model, suggests that the protoplanetary disk begins to fragment after just a few spins around its star. As the disk fragments, clusters of matter begin to form quickly and immediately start to draw in the gases that form vapor shrouds around gas giants.

The existence of gas giant planets, it turns out, seems to be fairly common. Since the mid-1990s, researchers have discovered more than 100 planets, generally from the mass of Jupiter to 10 times that size, orbiting stars outside the solar system. Those planets were deduced by their gravitational effect on their parent stars, and their discovery lends credence to the new research, Quinn said.

Lucio Mayer, a former UW post-doctoral researcher who recently joined the University of Zurich, is lead author of a paper detailing the work, published in the Nov. 29 edition of Science. Besides Quinn, co-authors are James Wadsley of McMaster University, Hamilton, Ontario, Canada, and Joachim Stadel at the University of Victoria, British Columbia, Canada. Their work is supported by grants from the National Science Foundation and the National Aeronautics and Space Administration’s Astrobiology Institute.

Since the early 1950s, some scientists have entertained the notion that gas giant planets were formed quickly. However, the model, using a specialized fluid dynamics simulation, had never been refined enough to show what it does now. The Mayer-Quinn team spent the better part of two years refining calculations and plugging them into the model to show what would happen to a protoplanetary disk over a longer time.

The new model explains why two other giant planets in our system, Uranus and Neptune, don’t have gas envelopes like Jupiter and Saturn, Quinn said. At the time those planets were being formed, the solar system was part of a star cluster. The outer planets of Uranus and Neptune were too close to a nearby star – one that has since migrated away – and therefore lost whatever gas envelopes they might have accumulated.

Neither the new model nor the standard model accounts for why most of the gas giant planets found outside the solar system are much nearer their suns than are Jupiter and Saturn, Quinn said. The most common belief currently is that the planets formed farther away from their stars and then migrated inward to the positions where they have been discovered.

The new model also doesn’t account for the formation of terrestrial planets, like Earth and Mars, near our sun. But Quinn suspects that perhaps the smaller terrestrial planets were formed over longer periods by processes described by the standard planet-formation model, while the new model explains how the larger gas giants came to be.