You are here: Home › News › Space › Stars can create DNA precursors, suggests new experiment
By Will Parker on May 6, 2015 in News, Space 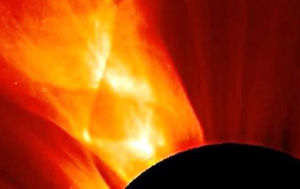 Scientists at Berkeley Lab and the University of Hawaii have shown how DNA’s molecular precursors – carbon ring structures with embedded nitrogen atoms – could be created in the region surrounding a star. The new work adds to previous intriguing observations of what appear to be organic molecules in distant stellar environments.

“This is the first time anyone’s looked at a hot reaction like this,” says Musahid Ahmed, from the Chemical Sciences Division at Berkeley Lab. “It’s not easy for carbon atoms to form rings that contain nitrogen, but this new work demonstrates the possibility of a hot gas phase reaction – a cosmic barbeque.”

For decades, astronomers have pointed their telescopes into space to look for signatures of these nitrogen-containing double carbon rings called quinoline, Ahmed explains. They’ve focused mostly on the space between stars (the interstellar medium). While the stellar environment has been deemed a likely candidate for the formation of carbon ring structures, no one had spent much time looking there for nitrogen-containing carbon rings.

“There’s an energy barrier for this reaction to take place, and you can exceed that barrier near a star, or in our experimental setup,” Ahmed says. “This suggests that we can start looking for these molecules around stars now.”

“Once ejected in space, in cold molecular clouds, these molecules can then condense on cold interstellar nanoparticles, where they can be processed and functionalized.” Kaiser adds. “These processes might lead to more complex, biorelevant molecules such as nucleobases of crucial importance to DNA and RNA formation.”