You are here: Home › News › Space › Water discovered in remnants of destroyed exoplanet
By Will Parker on October 10, 2013 in News, Space 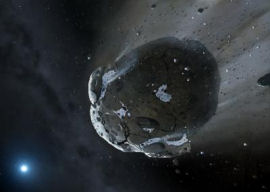 Astrophysicists have found the first evidence of a water-rich rocky planetary body outside our solar system in its shattered remains orbiting a white dwarf 170 light years away.

The analysis of the dust and debris surrounding the white dwarf star GD 61 was conducted by scientists at the Universities of Warwick and Cambridge and appears in the journal Science.

Using observations obtained with Hubble and the Keck telescope, the team found an excess of oxygen – a chemical signature that indicates that the debris had once been part of a bigger body originally composed of 26 percent water by mass. By contrast, only approximately 0.023 percent of the Earth’s mass is water.

Evidence for water outside our solar system has previously been found in the atmosphere of gas giants, but this study marks the first time it has been pinpointed in a rocky body, making it of significant interest in our understanding of the formation and evolution of habitable planets and life.

The researchers suggest it is most likely that the water detected around the white dwarf GD 61 came from a minor planet at least 90 km in diameter (but potentially much bigger) that once orbited the parent star before it became a white dwarf.

In its former life, GD 61 was a star somewhat bigger than our Sun, and host to a planetary system. About 200 million years ago, GD 61 entered its death throes and became a white dwarf, yet, parts of its planetary system survived. The water-rich minor planet was knocked out of its regular orbit and plunged into a very close orbit, where it was shredded by the star’s gravitational force. The researchers believe that destabilizing the orbit of the minor planet requires a so far unseen, much larger planet going around the white dwarf.

“At this stage in its existence, all that remains of this rocky body is simply dust and debris that has been pulled into the orbit of its dying parent star,” explained Boris G�nsicke, from the University of Warwick. “However this planetary graveyard swirling around the embers of its parent star is a rich source of information about its former life. Two ingredients – a rocky surface and water – are key in the hunt for habitable planets outside our solar system so it’s very exciting to find them together for the first time outside our solar system.”

Related:
Discuss this article in our forum
Exoplanet has its clouds mapped
New Neptunian moon discovered by Hubble
Nearby star may have 3 habitable planets
Hubble identifies Earth-like debris in white dwarfs’ atmospheres