You are here: Home › News › Space › Hubble identifies Earth-like debris in white dwarfs’ atmospheres
By Will Parker on May 9, 2013 in News, Space 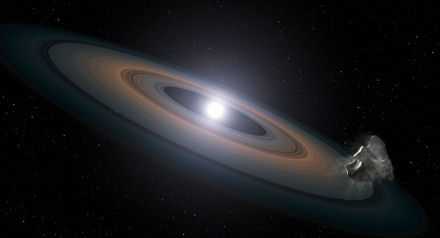 The Hubble Space Telescope has found the building blocks of Earth-like planets in an unlikely place: the atmospheres of a pair of burnt-out white dwarf stars in a nearby star cluster. According to astronomers from the European Space Agency, the new discovery suggests that rocky planet assembly is common in such clusters.

The pair of white dwarfs reside 150 light-years away in the Hyades star cluster, in the constellation of Taurus. The cluster is relatively young, at only 625 million years old. Astronomers believe that all stars formed in clusters. However, previous searches for planets in clusters have not been fruitful – of the roughly 800 exoplanets known, only four are known to orbit stars in clusters. This scarcity may be due to the nature of the cluster stars, which are young and active, producing stellar flares and other outbursts that make it difficult to study them in detail.

Now, however, a new study led by Jay Farihi of the University of Cambridge, focused instead on “retired” cluster stars to hunt for signs of planet formation.

Farihi said Hubble’s spectroscope identified silicon in the atmospheres of the two white dwarfs. Silicon is a major ingredient of the rocky material that makes up Earth and other terrestrial planets in the Solar System. Farihi thinks this silicon may have come from asteroids that were gravitationally torn apart by the white dwarfs when they veered too close. The rocky debris then likely formed a ring around the dead stars.

The debris detected whirling around the white dwarfs suggests that terrestrial planets formed when these stars were born. After the stars collapsed to form white dwarfs, surviving gas giant planets may have gravitationally nudged members of any leftover asteroid belts into star-grazing orbits.

“We have identified chemical evidence for the building blocks of rocky planets,” says Farihi. “When these stars were born, they built planets, and there’s a good chance that they currently retain some of them. The signs of rocky debris we are seeing are evidence of this – it is at least as rocky as the most primitive terrestrial bodies in our Solar System.”

Besides finding silicon in the Hyades stars’ atmospheres, Hubble also detected low levels of carbon. This is another sign of the rocky nature of the debris, as astronomers know that carbon levels should be very low in rocky, Earth-like material.

“The one thing the white dwarf pollution technique gives us that we won’t get with any other planet detection technique is the chemistry of solid planets,” Farihi says. “Based on the silicon-to-carbon ratio in our study, for example, we can actually say that this material is basically Earth-like.”

Farihi and the rest of the team plan to analyze more white dwarfs using the same technique to identify not only the rocks’ composition, but also their parent bodies. “The beauty of this technique is that whatever the Universe is doing, we’ll be able to measure it,” Farihi said. “We have been using the Solar System as a kind of map, but we don’t know what the rest of the Universe does. Hopefully with Hubble and its powerful ultraviolet-light spectrograph, and with the upcoming ground-based 30- and 40-metre telescopes, we’ll be able to tell more of the story.”