You are here: Home › News › Space › Habitable planets galore, suggests Kepler data-crunching
By Will Parker on January 8, 2013 in News, Space

A detailed analysis of the first three years of data from NASA’s Kepler mission, which already has discovered thousands of potential exoplanets, contains good news for those searching for habitable worlds outside our solar system.

The findings, presented today at a session during the American Astronomical Society meeting, were compiled by a team of astronomers from the University of California, Berkeley, and the University of Hawaii. Their data show that 17 percent of all sun-like stars have planets one to two times the diameter of Earth orbiting close to their host stars. 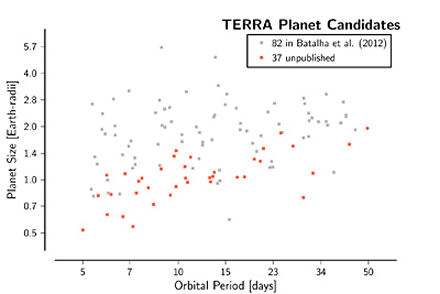 This estimate includes only planets that circle their stars within a distance of about one-quarter of Earth’s orbital radius – the current limit of Kepler’s detection capability. Further evidence suggests that the fraction of stars having planets the size of Earth or slightly bigger orbiting within Earth-like orbits may amount to 50 percent.

“Our key result is that the frequency of planets increases as you go to smaller sizes, but it doesn’t increase all the way to Earth-size planets – it stays at a constant level below twice the diameter of Earth,” said Andrew Howard, from the University of Hawaii.

Planets one to two times the size of Earth are not necessarily habitable. Painstaking observations by Erik Petigura and others at Berkeley show that planets two or three times the diameter of Earth are typically like Uranus and Neptune, which have a rocky core surrounded by helium and hydrogen gases and perhaps water. Planets close to the star may even be water worlds – planets with oceans hundreds of miles deep above a rocky core. Nevertheless, planets between one and two times the diameter of Earth may well be rocky and, if located within the Goldilocks zone could support life.

The estimates are based on a better understanding of the percentage of big Earth-size planets that Kepler misses because of uncertainties in detection, which the team estimates to be about one in four, or 25 percent. 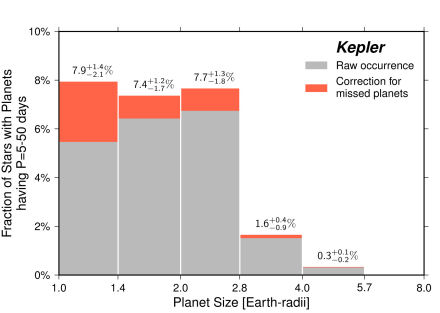 “It may seem crazy to spend two years redoing what the Kepler team has already done, but the question we are asking ‘How many Earth-size planets are we missing?’ is so important that we wanted to do it separately for cross-validation,” Petigura explained.

After carefully measuring the fraction of planets missed by TERRA, the team corrected for this and conducted a thorough analysis of 12 of the 13 quarters of Kepler observations. They identified 119 Earth-like planets ranging in size from nearly six times the diameter of Earth to the diameter of Mars. Thirty-seven of these planets were not identified in previous Kepler reports.

Petigura’s team now estimates that the abundance of planets stops rising at about twice Earth’s diameter and remains the same until the size of Earth, the limit of their analysis. This corrects an impression left by Howard’s earlier paper that the frequency of Earth-size planets actually decreases below twice Earth’s diameter. “A year ago, Kepler had found only a few planets smaller than twice Earth’s diameter, far fewer than would be expected if you extrapolate downward from the abundances of larger planets,” he explained. Accounting for planets that Kepler misses still means that “big Earths” are one third as abundant as would be expected if the rising trend continued below twice the diameter of Earth.

Howard noted, however, that if 17 percent of all stars have Earth-size planets within the orbit of Mercury, “where are they in our solar system? Maybe our solar system is an anomaly compared to the great variety of stars.”