You are here: Home › News › Worry Fuel › Ecotourism wildcard in African disease cocktail
By Will Parker on April 24, 2013 in News, Worry Fuel 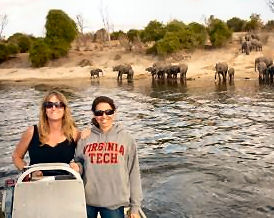 Somewhat counter-intuitively, protected areas of Africa where numbers of humans are limited appear to also be hotspots for the exchange of fecal matter between animals and humans. “The research identifies the coupled nature of humans, animals, and the natural environment across landscapes, even those designated as protected,” said Kathleen Alexander, an associate professor of wildlife at Virginia Tech. “With few new antibiotics on the horizon, wide-scale antibiotic resistance in wildlife across the environment presents a critical threat to human and animal health. As humans and animals exchange microorganisms, the threat of emerging disease also increases.”

Alexander and her Virginia Tech co-researchers’ work, detailed in the journal EcoHealth, involved an analysis of fecal samples from three troops of banded mongoose living in Botswana’s Chobe National Park and three troops living in villages outside the park.

“Banded mongoose forage in garbage resources and search for insects in fecal waste, including human sources found in the environment,” said Alexander. “Mongoose contact with other wildlife and humans, and broad occurrence across the landscape, makes this species an ideal candidate for evaluating microbial exchange and the potential for pathogens to be transmitted and emerge at the human-wildlife interface.”

With the exception of one mongoose troop, all study animals had some level of their range overlap with human populations, Alexander explained. Two of the study troops had home ranges that included ecotourism facilities in the protected area, with some contact with humans and development “but at a much lower level than in the village troops.”

The project screened for nine locally available antimicrobials, including ampicillin, tetracycline, doxycycline, and streptomycin, as well as ceftiofur, a veterinary drug not available in the study area.

The researchers discovered 57 percent of banded mongoose had E. coli that was antibiotic resistant. “Resistance was identified among individuals in all sampled troops,” the study notes. The animals were most commonly resistant to ampicillin, followed by doxycyline, tetracycline, and streptomycin.

But it was the prevalence of multidrug resistance that was most alarming for Alexander. “There was a significant difference between troops in protected area and those outside the park, although not what you might expect,” she said.

As is common of mongoose that live near humans, the troop near the ecotourism facility utilized the opportunities presented by its human neighbors, setting up residence in the drain fields of the open septic tanks servicing the employee accommodations and foraging around employee living quarters, including eating food remains from dishes left outside. One interaction between the employees resulted in an unexpected finding – the kitchen staff fed raw meat waste from commercially produced chickens to mongoose. “This may be how the mongoose developed resistance to ceftiofur,” Alexander suggests.

The one troop living in an undisturbed region of the park was resistant to only ampicillin. “These findings reinforce the significance of human impacts to natural environments, even when human numbers are low,” noted Alexander.

The study suggests that the impact of microbial exchange and antibiotic resistance accumulation in mongoose may extend through food webs. “Mongoose are eaten by a large number of avian, reptile, and mammalian predators including domestic dogs,” said Alexander. “Thus, the cascading effects of exposure of wildlife species to human waste-associated microbes can impact an array of susceptible species across an ecosystem and in turn increase human exposure, coupling humans and natural systems in complicated ways.”

Related:
Discuss this article in our forum
Breakthrough in stabilizing vaccines and antibiotics without refrigeration
Antibiotics found to have transgenerational effects
Antibiotics Absorbed By Vegetables
Environmental Persistence Of Tamiflu Causes Concern

Alzheimer’s may be transmissible a la mad cow disease