You are here: Home › News › Worry Fuel › Alzheimer’s may be transmissible a la mad cow disease
By Will Parker on October 5, 2011 in News, Worry Fuel 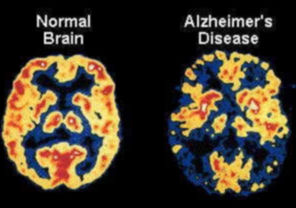 Alzheimer’s disease is a form of progressive dementia that affects memory, thinking and behavior. The plaques caused by misshapen aggregates of beta amyloid protein, along with twisted fibers of the protein tau, are the two major hallmarks associated with the disease.

Study co-author Claudio Soto, of the University of Texas, says the new findings indicate that an unknown number of sporadic Alzheimer’s cases may arise from an infectious process. Of the 5 million cases of Alzheimer’s in the United States, 90 percent are sporadic. “The underlying mechanism of Alzheimer’s disease is very similar to the prion diseases. It involves a normal protein that becomes misshapen and is able to spread by transforming good proteins to bad ones. The bad proteins accumulate in the brain, forming plaque deposits that are believed to kill neuron cells in Alzheimer’s,” Soto explained.

“We took a normal mouse model that spontaneously does not develop any brain damage and injected a small amount of Alzheimer’s human brain tissue,” said Soto. “The mouse developed Alzheimer’s [and] over time it spread to other portions of the brain.” Soto is now working on establishing whether disease transmission can happen under more natural routes of exposure.