You are here: Home › News › Worry Fuel › Compelling new evidence for artificial lighting’s role in breast cancer
By Will Parker on July 29, 2014 in News, Worry Fuel 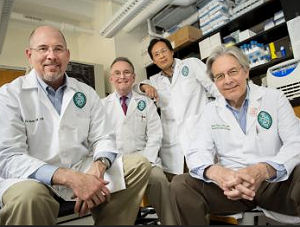 Scientists have found that for laboratory rats with human breast tumors, exposure to dim light at night made the tumors resistant to the breast cancer drug tamoxifen. The new findings, appearing in the journal Cancer Research, are the first to show that a significant correlation exists between melatonin levels and the effectiveness of tamoxifen.

“Resistance to tamoxifen is a growing problem among patients with hormone receptor-positive breast cancer,” said principal investigator Steven M. Hill (left in pic), from Tulane University. “Our data, although they were generated in rats, have potential implications for the large number of patients with breast cancer who are being treated with tamoxifen, because they suggest that nighttime exposure to light, even dim light, could cause their tumors to become resistant to the drug by suppressing melatonin production.”

For the first part of the study, Hill and co-researcher David Blask (right in pic) kept rats in a daily light/dark cycle of 12 hours of light followed by 12 hours of total darkness (melatonin is elevated during the dark phase) for several weeks. In the second phase, the researchers exposed them to the same daily light/dark cycle; however, during the 12 hour dark phase, animals were exposed to extremely dim light at night (melatonin levels are suppressed), roughly equivalent to faint light coming under a door.

“These findings have potentially enormous implications for women being treated with tamoxifen and also regularly exposed to light at night due to sleep problems, working night shifts or exposed to light from computer and TV screens,” said Hill.

However, Hill cautions that although melatonin supplements are readily available over the counter at most drug and health-food stores, the research is not at a point where he can make a general recommendation that breast cancer patients taking tamoxifen should go out and buy melatonin.

“These data suggest that, in the not-too distant-future, it may be possible to combine melatonin and tamoxifen,” he explained. “However, before this is done we would need to identify the optimal times of day to give the two because if the timing between the two is off, the advantage of giving them in combination may be lost. This brings up another important point: Our levels of melatonin are not determined by sleep, as many people think. It is actually the darkness that is important. During the night, if you sleep in a brightly lit room, your melatonin levels may be inhibited; however, if you are in the dark but cannot sleep, your melatonin levels will rise normally.”

Related:
Discuss this article in our forum
Antihistamines may be next blockbuster anti-cancer drug
More evidence for opiates role in cancer growth
Bright light at night carcinogenic