You are here: Home › Environment › News › Massive depletion of Middle East freshwater reserves
By Will Parker on February 13, 2013 in Environment, News 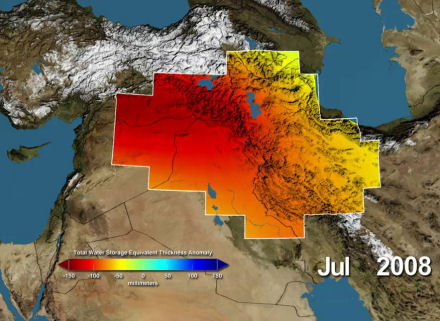 Already strained by water scarcity and political tensions, the arid Middle East along the Tigris and Euphrates rivers is losing critical water reserves at a rapid pace, from Turkey upstream to Syria, Iran and Iraq below.

The researchers, from the University of California – Irvine, based their findings on satellite measurements from 2003 – 2010 that showed the four nations lost 144 cubic kilometers of water – nearly equivalent to all the water in the Dead Sea. The researchers attribute the bulk of the depletion – about 60 percent – to the pumping of water from underground reservoirs. According to their figures, published in Water Resources Research, the Tigris-Euphrates watershed is drying up at a pace second only to that in India.

Water management has always been a complex issue in the Middle East, with limited water resources and many competing stakeholders. Turkey has jurisdiction over the Tigris and Euphrates headwaters, as well as the reservoirs and infrastructure of its Southeastern Anatolia Project, which dictates how much water flows downstream into Syria, Iran and Iraq. Turkey’s control of water distribution to adjacent countries has caused tension, such as during the 2007 drought, when it continued to divert water to irrigate its own agricultural land.

“That decline in stream flow put a lot of pressure on downstream neighbors,” said researcher Katalyn Voss. “Both the United Nations and anecdotal reports from area residents note that once stream flow declined, the northern part of Iraq had to switch to groundwater. In a fragile social, economic and political environment, this did not help.”

Meanwhile, the area’s demand for freshwater is rising at the worst possible time. “They just do not have that much water to begin with, and they’re in a part of the world that will be experiencing less rainfall with climate change. Those dry areas are getting drier,” co-researcher Jay Famiglietti noted. “Everyone in the world’s arid regions needs to manage their available water resources as best they can.”