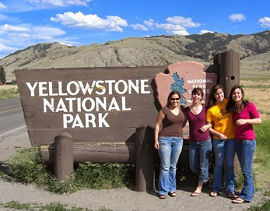 Stanford University scientists have been using the vast number of vacation snaps on photo-sharing site Flickr to measure where and when people are using natural areas for recreation and tourism.

While a great deal is known about how man-made tourist destinations, such as theme parks, contribute to local economies, it has always been more difficult to figure out the contribution of natural areas such as parks and beaches.

In the Flickr project, detailed in Scientific Reports, the researchers utilized information from 1.4 million geo-tagged images and the user profiles associated with them. This is the first study to use social media data to attempt to predict tourist numbers.

To measure the accuracy of their estimates obtained from Flickr, the researchers compared their figures with data from on-site surveys at 836 recreational sites around the world. Specifically, where people were going and where they were coming from.

The comparison, say the researchers, shows that Flickr data can serve as a reliable indicator of how many people visit a tourist attraction each year, when they are visiting, where they are from, and what particular areas of the site are the most popular.

Until now, researchers had to rely on local surveys and head counts to get this type of visitation information. Using social media to get ideas of where people are visiting, and where they are coming from, is faster, less expensive and better for looking at changes over time and space, according to the study’s lead author Spencer Wood. “Information from crowd-sourced social media is revolutionizing the way we study people and understand their choices,” she said.

“This new approach provides the opportunity to clarify what attracts people to natural areas, and to determine if changes in ecosystems lead to changes in visitation rates,” Wood suggests. “It also holds the promise of better natural area management because land-use planners, park managers and government officials can use the information on visitation rates to better manage their lands for the people who use them.”