You are here: Home › Environment › News › Flushed pharmaceuticals fueling fearless fish
By Will Parker on February 14, 2013 in Environment, News 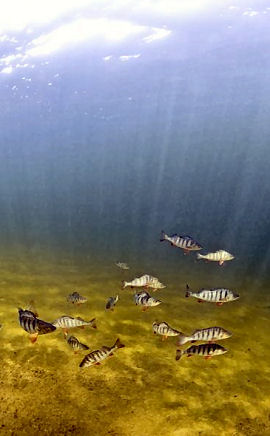 The study, by researchers at Ume� University in Sweden, focused on the drug oxazepam (marketed as Serepax, Alepam, Medopam, Murelax, Noripam, and others). Reporting their findings in Science, the researchers say the persistence of the drug could lead to unexpected ecological impacts.

Oxazepam is used to treat anxiety in humans but residues often wind up in natural aquatic systems, downstream from sewage treatment plants. In the new study, lead researcher Tomas Brodin dosed wild perch with amounts of oxazepam equivalent to those currently found in Sweden’s rivers and streams. The results suggest that even small amounts of the drug can alter the behavior and the foraging rates of these fish.

“While alone, fish that were exposed to oxazepam dared to leave safe refuge and enter novel, potentially dangerous areas,” explained Brodin. “In contrast, unexposed fish stayed hidden in their refuge. The exposed fish seemed much less stressed and scared, behaving calmer and bolder.”

Perch that were exposed to the drug also devoured their food more quickly than unexposed fish – a behavioral quirk that the researchers say could alter the composition of species in the water and lead to events, such as increased algal blooming, over time. Since fish are generally integral pieces of their food webs, Brodin believes that changes in their eating patterns could disturb ecological balances.

The fish that were given oxazepam during the study also became anti-social, distancing themselves from other perch and putting themselves at greater risk of predation. “Perch that were exposed to oxazepam lost interest in hanging out with the group, and some even stayed as far away from the group as possible,” explained Brodin.

The new study singled out a particular psychiatric drug that has been found in natural systems, but a veritable cocktail of drugs can be found in waterways worldwide. Brodin says more comprehensive studies are needed before general conclusions can be drawn, but these current findings suggest that the concentrations of oxazepam in Sweden’s surface waters could have unexpected ecological and evolutionary consequences over time.