You are here: Home › Health › Mental Health › News › Successful clinical trial for ketamine-like antidepressant
By Will Parker on December 8, 2012 in Mental Health, News 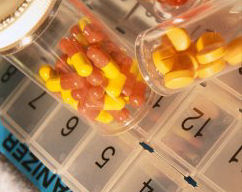 Researchers are reporting a successful phase IIa clinical trial of GLYX-13, a first-of-its-kind ketamine-like antidepressant that takes effect within 24 hours and delivers double the antidepressant effect of traditional selective serotonin re-uptake inhibitor (SSRI) treatments. Details of the clinical development of GLYX-13 appear in the current issue of the journal Neuropsychopharmacology and the trial results were presented last Thursday at the 51st Annual Meeting of the American College of Neuropsychopharmacology.

GLYX-13 was developed by a team led by Joseph Moskal, research professor of biomedical engineering at Northwestern University. Moskal said the drug was novel because it targets the brain receptors responsible for learning and memory – a very different approach from SSRI antidepressants. The researchers speculate it also could be helpful in treating other neurological conditions, including schizophrenia, bipolar disorder, anxiety and Alzheimer’s disease.

GLYX-13 works by modulating the N-methyl-D-aspartate (NMDA) receptor in the brain, as do other NMDA receptor antagonists such as ketamine, but GLYX-13 does not have their serious and limiting side effects, such as hallucinations and schizophrenia-like effects. NMDA receptors play a key role in regulating synaptic plasticity – the quality of the connection between neurons – and thus are important in regulating learning and memory functions.

In trials administered at 12 sites across the country, a single dose of GLYX-13 resulted in significant reductions in depression symptoms among subjects who had shown little improvement with previous drugs. The positive effects of GLYX-13 were evident within 24 hours and lasted an average of seven days. The effect size, a measure of the magnitude of the drug’s antidepressant efficacy, at both these times after a single dose was nearly double the effect size seen with most other antidepressant drugs after four to six weeks of repeated dosing. Side effects of GLYX-13 were mild to moderate and were consistent with those observed in subjects receiving a placebo.

GLYX-13 is administered intravenously but Moskal is working on an oral version. The drug is currently undergoing a phase IIb clinical trial at 20 sites across the United States. This trial is evaluating repeated doses of the drug.