You are here: Home › Health › Mental Health › News › Toxoplasmosis linked to suicide attempts
By Will Parker on July 3, 2012 in Mental Health, News 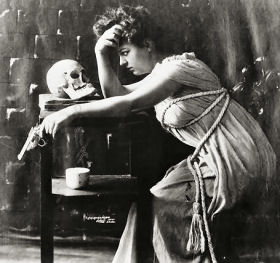 Around one-third of the world’s population is infected with the parasite, which hides in cells in the brain and muscles, often without producing symptoms. Toxoplasmosis infection has beenlinked to mental illness, such as schizophrenia, and changes in behaviour.

The parasite thrives in the intestines of cats, is spread via their feces and can infect all warm-blooded animals. Humans can become infected by changing their infected cats’ litter boxes, eating unwashed vegetables, drinking water from a contaminated source, or more commonly, by eating undercooked or raw meat that is infested with cysts.

In the new study, researchers analyzed data from more than 45,000 women in Denmark who gave birth between 1992 – 1995 and whose babies were screened for T. gondiiantibodies. Babies don’t produce antibodies to T. gondii for three months after they are born, so the antibodies present in their blood represented infection in the mothers.

But, he also notes limitations to the study, such as the inability to determine the cause of the suicidal behavior. “Is the suicide attempt a direct effect of the parasite on the function of the brain or an exaggerated immune response induced by the parasite affecting the brain? We do not know. In fact, we have not excluded reverse causality as there might be risk factors for suicidal behavior that also make people more susceptible to infection with T. gondii,” Postolache explained. “If we can identify a causal relationship, we may be able to predict those at increased risk for attempting suicide and find ways to intervene and offer treatment.”

Commenting on the study, Columbia University’s J. John Mann, an expert on suicide, says that evidence is accumulating on immune factors being associated with suicidal behavior. “Identifying neurotropic latent infections potentially triggering or perpetuating a heightened immune response in patients at risk could lead to new ways of thinking of risk, prevention and risk reduction for suicide.”