You are here: Home › Humans › News › Chin augmentations skyrocket
By Will Parker on April 17, 2012 in Humans, News 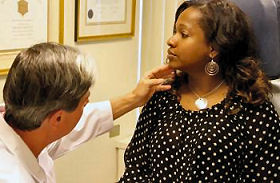 The always fascinating annual statistics report from the American Society of Plastic Surgeons (ASPS) shows that chin augmentation is the fastest growing plastic surgery procedure – a phenomenon, speculate surgeons, sparked by a desire for success in the workplace and the increased usage of video chat technology.

“The chin and jawline are among the first areas to show signs of aging. People are considering chin augmentation as a way to restore their youthful look just like a facelift or eyelid surgery,” said ASPS President Malcolm Z. Roth. “We also know that as more people see themselves on video chat technology, they may notice that their jawline is not as sharp as they want it to be. Chin implants can make a dramatic difference.”

Plastic surgeon Darrick Antell believes the ongoing tough employment market may be a driving force too. “We know that CEOs tend to be tall, attractive, good-looking people. We now know that these people also tend to have a stronger chin. As a result, people subconsciously associate a stronger chin with more authority, self-confidence and trustworthiness,” he noted.

Related:
Discuss this article in our forum
Body dysmorphia unimproved by cosmetic surgery
Face Transplants – Here’s Looking At You
Biological Cause For Body Dysmorphic Disorder?

Water not necessary for life?
Food and sex behaviors predicted with MRI