You are here: Home › Mind and Brain › News › Food and sex behaviors predicted with MRI
By Will Parker on April 18, 2012 in Mind and Brain, News 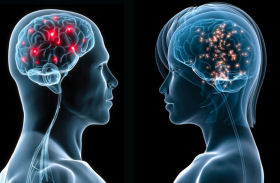 Previously used in experiments to see whether it could predict pop music success, magnetic resonance imaging (MRI) of the brain is now being turned to more serious endeavors. Dartmouth College scientists using MRI to investigate the areas of the brain to do with reward and self-control found they could predict the subjects’ levels of weight gain and sexual desires six months into the future. Details of the work, which demonstrates a connection between brain responses to appetite-driven cues and future behaviors, appear in The Journal of Neuroscience.

The researchers targeted a region of the brain known as the nucleus accumbens – the brain’s reward center – in a group of first-year college students. While undergoing the MRI scans, the subjects viewed images of animals, environmental scenes, food items, people and sexual imagery. Six months later their weight and responses to questions regarding sexual behavior were compared with their previously recorded weight and brain scan data.

“The people whose brains responded more strongly to food cues were the people who went on to gain more weight six months later,” explains Kathryn Demos, the first author on the paper.

Demos said that the participants who responded to food images gained weight but did not engage in more sexual behavior, and vice versa. She added that none of the non-food images predicted weight gain.

“This is one of the first studies in brain imaging that uses the responses observed in the scanner to predict important, real-world outcomes over a long period of time,” said co-researcher Todd Heatherton. “Using brain activity to predict a consequential behavior outside the scanner is pretty novel.”

The researchers believe that the findings could inform potential preventative strategies for the obesity epidemic. “We seek to understand situations in which people face temptations and try to not act on them,” they note. “The first step toward controlling cravings may be an awareness of how much you are affected by specific triggers in the environment.”