You are here: Home › Humans › News › Cars, TVs, triggering type-2 diabetes epidemic in developing world
By Will Parker on February 10, 2014 in Humans, News 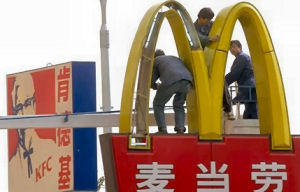 Skyrocketing obesity and an epidemic of type-2 diabetes look likely for developing countries, as researchers at Simon Fraser University find a striking correlation between disease prevalence and ownership of TVs, computers, and cars.

The findings, published in the Canadian Medical Association Journal, are based on data from more than 150,000 adults from 17 countries, ranging from high and middle income to low-income nations.

The study also showed that owning all three devices was associated with a 31 percent decrease in physical activity, 21 percent increase in sitting and a 3.8 inch increase in waist size compared with those who owned no devices.

Strikingly, the researchers found no association in high-income countries, suggesting that the effects of owning items linked to sedimentary lifestyles has already occurred, and is reflected in current high rates of these conditions.

“With increasing uptake of modern-day conveniences – TVs, cars, computers – low- and middle-income countries could see the same obesity and diabetes rates as in high-income countries that are the result of too much sitting, less physical activity and increased consumption of calories,” says Lear. “The results can lead to potentially devastating societal health care consequences in these countries.”

Chlamydia infection? Your gut may be to blame
Bees using scavenged plastic to build hives

The old sow in Distress,or the country parsons return from tithing,Clegy,Obesity