You are here: Home › News › Decomposing plastic refuse releasing BPA into oceans
By Will Parker on August 20, 2009 in News 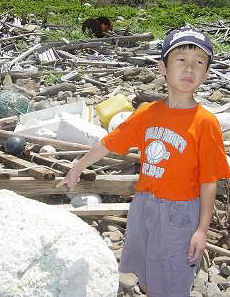 Plastic waste in the ocean isn’t just unsightly and a danger to marine animals. Scientists have now found that certain plastics breakdown rapidly in the ocean, releasing a heady cocktail of toxic chemicals such as bisphenol A (BPA) which is known to interfere with mammalian reproductive systems.

In the first study to look at how plastic waste breaks-down in seawater, scientists from Nihon University in Japan report that many plastics decompose in the ocean with surprising speed. They delivered their findings to the 238th National Meeting of the American Chemical Society (ACS), where they called the discovery “surprising.”

“Plastics in daily use are generally assumed to be quite stable,” said lead researcher Katsuhiko Saido. “We found that plastic in the ocean actually decomposes as it is exposed to the rain and sun and other environmental conditions, giving rise to yet another source of global contamination that will continue into the future.”

Saido said his team found that when plastic decomposes it releases potentially toxic BPA and PS oligomer into the water. Plastics usually do not break down in an animal’s body after being eaten. However, the substances released from decomposing plastic are absorbed and could have adverse effects. BPA and PS oligomer are sources of concern because they can disrupt the functioning of hormones in animals and can seriously affect reproductive systems.

Saido also described a new method to simulate the breakdown of plastic products in the ocean. The process involves modeling plastic decomposition at room temperature, removing heat from the plastic and then using a liquid to extract the BPA and PS oligomer. When the plastic broke-down, it released three new compounds not found in nature. They were styrene monomer, styrene dimer and styrene trimer. Styrene monomer is a known carcinogen and the others are suspected in causing cancer.