You are here: Home › Evolution › News › Black Queen Hypothesis offers new interpretations of organism interdependency
By Will Parker on April 5, 2012 in Evolution, News 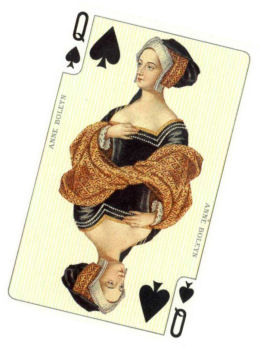 A new theory based on the same premise as the card game Hearts (also known as Hunt the Lady or Black Lady) turns traditional evolutionary thinking on its head by showing that some living organisms evolve and survive by discarding genes rather than adding them. Erik Zinser, a microbiologist at the University of Tennessee, details the theory in the online journal mBio.

The goal of the card game Hearts is to avoid winning the Queen of Spades (the Black Queen, worth the highest number of points) and any hearts (also worth points). Subsequently, players allow others to take the high-point card while they enjoy low-score tallies. The winner is the player with the lowest score.

This same evasion-style game play applies in evolution, argues Zinser, who contends that evolution pushes microorganisms to lose essential functions when there is another species around to perform them. “A common assumption about evolution is that it is directed toward increasing complexity,” he explained. “But we know from analysis of microbial genomes that some lineages trend toward decreasing complexity, exhibiting a net loss of genes relative to their ancestor.”

“This marine microorganism continued to mystify us because it is the most common photosynthetic organism on Earth, but it is extremely difficult to grow in pure culture,” Zinser said. “A major reason for this difficulty is that Prochlorococcus is very sensitive to reactive oxygen species such as hydrogen peroxide and relies on other bacteria to protect them by breaking down these toxic substances for them.”

Zinser proposes that Prochlorococcus had once performed this function itself, but natural selection decided it was too costly – like carrying the Queen of Spades – and discarded this ability. Instead, Prochlorococcus benefits from the hard work of others within its community allowing it to concentrate its energies elsewhere – such as multiplying.

The hypothesis offers an intriguing new way of looking at complicated, interdependent communities of microorganisms. “We know that certain microbial activities, such as hydrogen peroxide scavenging, are ‘leaky,’ meaning their impacts extend beyond the cell and into the environment,” Zinser said. “What the hypothesis suggests is that this leakiness can drive a community toward greater interdependence, even if some members are unwitting participants in this process.”

This interdependence could lend itself to vulnerabilities. Zinser says the work highlights the importance of biological diversity, because if rare members are lost, “the consequences for the community could be disastrous. This would be analogous to attempting to play Hearts without the Queen of Spades.”

The hypothesis, at this time, is limited to microorganisms, but Zinser believes it could be extended to larger free-living organisms. “All that is needed is a card which no player wants yet is crucial for the game to be played,” he concluded.