You are here: Home › Mind and Brain › News › Brain scans hint at root of consciousness
By Will Parker on April 8, 2012 in Mind and Brain, News 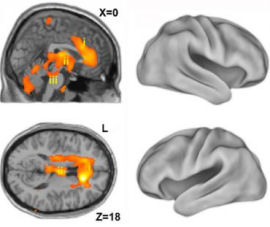 Imaging internal brain activity under anesthesia has provided researchers with revealing insights into what happens when the subjective phenomenon of consciousness first vanishes and then re-emerges. Identifying which brain mechanisms are involved in the emergence of the conscious state will contribute to the ongoing quest to explain human consciousness. The work, detailed in The Journal of Neuroscience, was carried out by researchers from the University of Turku, Finland and the University of California, Irvine.

Lead researcher Harry Scheinin, from the University of Turku, revealed that the emergence of consciousness after anesthesia was found to be associated with activations of deep, primitive brain structures rather than the evolutionary younger neocortex.

“We expected to see the outer bits of brain, the cerebral cortex [often thought to be the seat of higher human consciousness], would turn back on when consciousness was restored following anesthesia. Surprisingly, that is not what the images showed us. In fact, the central core structures of the more primitive brain structures including the thalamus and parts of the limbic system appeared to become functional first, suggesting that a foundational primitive conscious state must be restored before higher order conscious activity can occur,” Scheinin explained.

The volunteers in the study were put under anesthesia using either dexmedetomidine or propofol. Dexmedetomidine is used as a sedative in intensive care unit settings and propofol is widely used for general anesthesia. Dexmedetomidine induced unconsciousness has a close resemblance to normal sleep, as it can be reversed with mild physical stimulation or noises without requiring any change in the dosing of the drug. This unique property was critical to the study design, as it enabled the investigators to separate the brain activity changes associated with the changing level of consciousness from the drug related effects on the brain.

The study notes that the emergence of consciousness, as assessed with a motor response to a spoken command, was associated with the activation of a core network involving subcortical and limbic regions that became functionally coupled with parts of frontal and inferior parietal cortices upon awakening from dexmedetomidine induced unconsciousness. This network thus enabled the subjective awareness of the external world and the capacity to behaviorally express the contents of consciousness through voluntary responses.

Interestingly, the same deep brain structures – brain stem, thalamus, hypothalamus and the anterior cingulate cortex – were also activated upon emergence from propofol anesthesia, suggesting a common, drug independent mechanism of arousal. For both drugs, activations seen upon regaining consciousness were mostly localized in deep, phylogenetically old brain structures, rather than in the neocortex.

While Scheinin believes anesthesia offers a unique window for understanding the internal brain processes involved, the ultimate nature of consciousness remains a mystery. Much harder questions – such as how (and why) these neural mechanisms create a feeling of being and an awareness of self – remain.

Related:
Discuss this article in our forum
Bringing Up BabyBot
Consciousness: Big brains not necessary
Was The Missing Link A Tripping Chimp?
Is Subconscious Perception the Root of All Evil?

CENTER FOR THE HEALING ARTS rare 1975 booklet "Psychoenergetics of Conciousness"

Transcendence of the Ego Existentialist Theory of Conciousness Jean-Paul Satre