You are here: Home › Mind and Brain › News › fMRI data trove yields new insights into consciousness and abstract thought
By Will Parker on December 16, 2015 in Mind and Brain, News 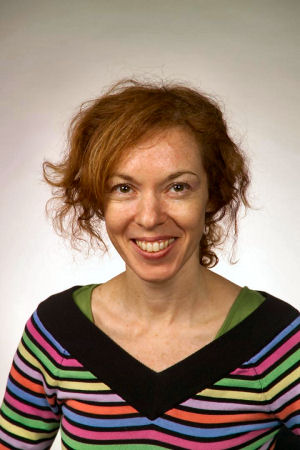 Using 20 years of functional magnetic resonance imaging (fMRI) data from tens of thousands of brain imaging experiments, neuroscientists at the University of Massachusetts have created a geometry-based method for massive data analysis to reach a new understanding of how thought arises from brain structure. The research, appearing in the current issue of Nature Scientific Reports, should provide fresh insights for researchers working in the field of deep learning artificial intelligence (AI) systems.

“fMRI detects changes in neural blood flow allowing researchers to relate brain activity with a cognitive behavior such as talking,” explained study co-author and computational neuroscientist Hava Siegelmann (pictured). “The fMRI-based research did a wonderful job relating specific brain areas with activities. But no one ever tied together the tens of thousands of experiments performed over decades to show how the physical brain could give rise to abstract thought.”

For the study, Siegelmann and her co-authors took a data-science approach. They first defined a physiological directed network of the whole brain, starting at input areas and labeling each brain area with the distance or “depth” from sensory inputs. They then processed the massive repository of fMRI data.

To illustrate, she suggests imagining a balance where the right pan holds total brain activity with the shallowest depth; the other pan holds activity in deepest brain areas most removed from inputs. If the balance arm describes the total brain activity for a particular cognitive behavior, the right pan will be lower, creating a negative slope, when most activity is in shallow areas, and the left pan will go lower when most activity is deeper, creating a positive slope. The balance arm’s slope describes the relative shallow-to-deep brain activity for any behavior.

“Our geometric algorithm works on this principle, but instead of two pans, it has many,” she says. The researchers summed all neural activity for a given behavior over all related fMRI experiments, then analyzed it using the slope algorithm. “With a slope identifier, behaviors could now be ordered by their relative depth activity with no human intervention or bias,” she adds. They ranked slopes for all cognitive behaviors from the fMRI databases from negative to positive and found that they ordered from more tangible to highly abstract. An independent test of an additional 500 study participants supported the result.

Siegelmann says this work will have great impact in computer science, especially in deep learning. “Deep learning is a computational system employing a multi-layered neural net, and is at the forefront of artificial intelligence (AI) learning algorithms,” she explains. “It bears similarity to the human brain in that higher layers are agglomerations of previous layers, and so provides more information in a single neuron.

But the brain’s processing dynamic is far richer and less constrained because it has recurrent interconnection, sometimes called feedback loops. In current human-made deep learning networks that lack recurrent interconnections, a particular input cannot be related to other recent inputs, so they can’t be used for time-series prediction, control operations, or memory.”

Her lab is now creating a “massively recurrent deep learning network,” she says, for a more brain-like and superior learning AI. Another interesting outcome of this research will be a new geometric data-science tool, which is likely to find widespread use in other fields where massive data is difficult to view coherently due to data overlap.

Brain inflammation linked to compromised reward circuits in depression
Could suicide be a variant of an evolutionarily adaptive set of behaviors?

MRI Essentials for the Spine Specialist, Hardcover by Khanna, A. Jay, M.D. (E...