You are here: Home › Humans › News › Empirical evidence for homophobia’s link to repressed same-sex attraction
By Will Parker on April 9, 2012 in Humans, News 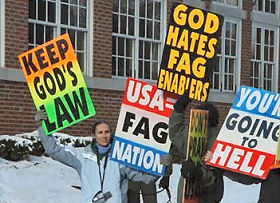 In the first study of its kind, researchers from the University of Rochester, the University of Essex and the University of California in Santa Barbara have found homophobia is more pronounced in individuals with an unacknowledged attraction to the same sex. The work, published in Journal of Personality and Social Psychology, is the first to document the role that both parenting and sexual orientation play in the formation of intense and visceral fear of homosexuals.

The research was based on four experiments, each involving an average of 160 college students. To explore participants’ explicit and implicit sexual attraction, the researchers measured the discrepancies between what people say about their sexual orientation and how they react during a split-second timed task. Students were shown words and pictures on a computer screen and asked to put these in “gay” or “straight” categories. Before each of the 50 trials, participants were subliminally primed with either the word “me” or “others” flashed on the screen for 35 milliseconds. They were then shown the words “gay,” “straight,” “homosexual,” and “heterosexual” as well as pictures of straight and gay couples while the computer tracked their response times. In the second experiment, subjects were free to browse same-sex or opposite-sex photos, thus providing an additional measure of implicit sexual attraction.

Through a series of questionnaires, participants also reported on the type of parenting they experienced growing up, from authoritarian to democratic. Students were asked to agree or disagree with statements like: “I felt controlled and pressured in certain ways,” and “I felt free to be who I am.” For gauging the level of homophobia in a household, subjects responded to items like: “My dad avoids gay men whenever possible.”

Finally, the researchers measured participants’ level of homophobia as revealed in word-completion tasks. In the latter, students wrote down the first three words that came to mind, for example for the prompt “k i _ _”. The study tracked the increase in the amount of aggressive words elicited after subliminally priming subjects with the word “gay” for 35 milliseconds.

Across all the experiments, participants with supportive and accepting parents were more in touch with their implicit sexual orientation, while participants from authoritarian homes revealed the most discrepancy between explicit and implicit attraction.

In addition, participants who reported themselves to be more heterosexual than their performance on the reaction time task indicated were most likely to react with hostility to gay others. That incongruence between implicit and explicit measures of sexual orientation predicted a variety of homophobic behaviors, including self-reported anti-gay attitudes, implicit hostility towards gays and endorsement of anti-gay policies.

According to the researchers, the findings provide new empirical evidence to support the psychoanalytic theory that the fear, anxiety, and aversion that some seemingly heterosexual people hold toward gays and lesbians can grow out of their own repressed same-sex desires.

“Individuals who identify as straight but in psychological tests show a strong attraction to the same sex may be threatened by gays and lesbians because homosexuals remind them of similar tendencies within themselves,” explains Netta Weinstein, from the University of Essex and the study’s lead author.

The findings may shed light on high profile cases in which anti-gay public figures are caught engaging in same-sex sexual acts. The authors write that this dynamic of inner conflict may be reflected in such examples as Ted Haggard, the evangelical preacher who opposed gay marriage but was exposed in a gay sex scandal in 2006, and Glenn Murphy, Jr., former chairman of the Young Republican National Federation and vocal opponent of gay marriage, who was accused of sexually assaulting a 22-year-old man in 2007.

“We laugh at or make fun of such blatant hypocrisy, but in a real way, these people may often themselves be victims of repression and experience exaggerated feelings of threat,” noted research director Richard Ryan, professor of psychology at the University of Rochester. “This study shows that if you are feeling that kind of visceral reaction to an out-group, ask yourself, ‘Why?’ Those intense emotions should serve as a call to self-reflection.”

Related:
Discuss this article in our forum
Samoan study reveals possible evolutionary role for homosexuality
For Sheep, Homosexuality Is In The Genes
Switching Gayness On And Off
Penile presence makes for abominable affairs

Homophobia Can Be Cured....Education iron-on/sew-on cloth patch 75mm round (cv)