You are here: Home › News › Physicists to probe flu virus for macro quantum effects
By Will Parker on March 12, 2010 in News 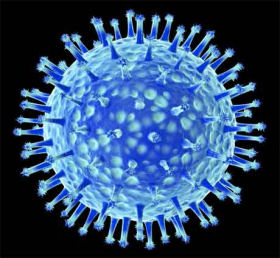 The weird world of quantum mechanics describes the strange and spooky, often contradictory, behavior of small objects such as individual atoms. Now, European scientists have described an experiment to test for quantum superposition states in much larger objects, composed of as many as one billion atoms.

The German-Spanish research group, split between the Max Planck Institute for Quantum Optics and the Institute of Photonic Sciences, plan to use the principles of an iconic quantum mechanics thought experiment – Schrödinger’s cat – to test for quantum properties in objects such as the flu virus.

Describing their plans in the New Journal of Physics, the researchers note how the tiniest constituents of matter can do two things at once (referred to as being in a superposition state), and of their “spooky” connection (referred to as entanglement) to their physically distant sub-atomic brethren. It is the ability of these tiny objects to do two things at once that Oriol Romero-Isart and his co-researchers want to probe at much larger scales using quantum optics, a process already in use for detecting quantum properties in single atoms.

Romero-Isart suggests that viruses are one type of object that could be successfully probed. Albeit speculatively, the researchers hope that their technique might offer a route to experimentally address questions such as the role of life and consciousness in quantum mechanics.

In order to test for superposition states, the planned experiment involves finely tuning lasers to capture objects such as viruses in an “optical cavity” (a very tiny space), another laser to slow the object down (and put it into what quantum scientists call a “ground state”) and then adding a photon in a specific quantum state to the laser to provoke the system into a superposition.

“We hope that this system will allow us to test quantum mechanics at larger scales, by preparing macroscopic superpositions of objects at the nano and micro scale. This could then enable us to use more complex microorganisms, and thus test the quantum superposition principle with living organisms by performing quantum optics experiments with them,” said Romero-Isart.