You are here: Home › News › Matrix turns opaque materials transparent
By Will Parker on March 10, 2010 in News 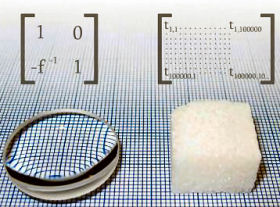 Experiments conducted by researchers at the City of Paris Industrial Physics and Chemistry Higher Educational Institution have shown that it’s possible to focus light through opaque materials and detect objects hidden behind them.

Reporting their findings in Physical Review Letters, the scientists explain that materials such as paper, paint and biological tissue are opaque because the light that passes through them is scattered in complicated and seemingly random ways.

To demonstrate their approach to “decoding” opaqueness, the researchers first passed light through a layer of zinc oxide (a common component of white paints). By studying the way the light beam changed as it encountered the material, they were able to generate a numerical model (called a transmission matrix) that included over 65,000 numbers describing the way that the zinc oxide layer affected the transmission of light.

They could then use the matrix to tailor a beam of light specifically to pass unhindered through the layer and focus on the other side. Alternatively, they could measure light emerging from the opaque material, and use the matrix to assemble an image of an object behind it.

The experiment shows that once a transmission matrix is generated, an opaque material could actually serve as a high quality optical element comparable to a conventional lens, In addition to allowing us to peer through paper or paint, and into cells, the technique opens up the possibility that opaque materials might be good optical elements in nanoscale devices, at sizes where the construction of transparent lenses is particularly challenging.