You are here: Home › News › Biologically inspired, ultra-broadband chip could enable “cognitive” radio
By Will Parker on June 4, 2009 in News 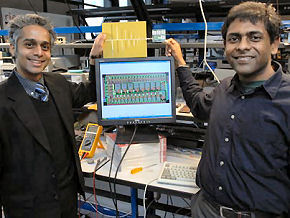 Associate professor of electrical engineering and computer science, Rahul Sarpeshkar (left), and graduate student, Soumyajit Mandal, designed the chip to mimic the inner ear, or cochlea. The chip is faster than any human-designed radio-frequency spectrum analyzer and also operates at much lower power. “The cochlea quickly gets the big picture of what’s going on in the sound spectrum,” said Sarpeshkar. “The more I started to look at the ear, the more I realized it’s like a super radio with 3,500 parallel channels.”

The new chip, which the researchers have dubbed the “radio frequency (RF) cochlea,” could play a key role in a universal or software radio architecture that is designed to efficiently process a broad spectrum of signals. The RF cochlea mimics the structure and function of the biological cochlea, which uses fluid mechanics, piezoelectrics and neural signal processing to convert sound waves into electrical signals that are sent to the brain.

As sound waves enter the cochlea, they create mechanical waves in the cochlear membrane and the fluid of the inner ear, activating hair cells (cells that cause electrical signals to be sent to the brain). The cochlea can perceive a 100-fold range of frequencies — in humans, from 100 to 10,000 Hz. Sarpeshkar used the same design principles in the RF cochlea to create a device that can perceive signals at million-fold higher frequencies, which includes radio signals for most commercial wireless applications.

The RF cochlea, embedded on a silicon chip measuring 1.5 mm by 3 mm, works as an analog spectrum analyzer, detecting the composition of any electromagnetic waves within its perception range. Electromagnetic waves travel through electronic inductors and capacitors (analogous to the biological cochlea’s fluid and membrane). Transistors play the role of the cochlea’s hair cells.

The chip is faster than any other RF spectrum analyzer and consumes about 100 times less power than what would be required for direct digitization of the entire bandwidth. That makes it desirable as a component of a universal or “cognitive” radio, which could receive a broad range of frequencies and select which ones to attend to.

Sarpeshkar says that engineers can learn a great deal from studying biological systems that have evolved over hundreds of millions of years to perform sensory and motor tasks very efficiently in noisy environments while using very little power. “Humans have a long way to go before their architectures will successfully compete with those in nature, especially in situations where ultra-energy-efficient or ultra-low-power operation are paramount,” he said. But; “We can mine the intellectual resources of nature to create devices useful to humans, just as we have mined her physical resources in the past.”